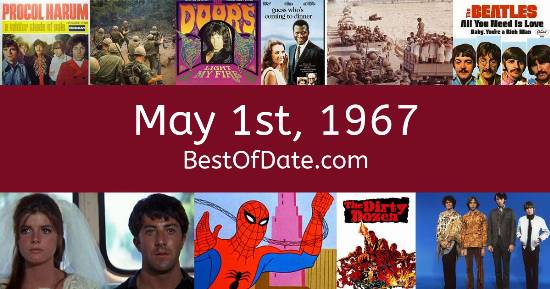 Songs that were on top of the music singles charts in the USA and the United Kingdom on May 1st, 1967.

The date is May 1st, 1967 and it's a Monday. Anyone born today will have the star sign Taurus. The summer of 1967 has finally arrived. The weather has warmed up and the evenings are brighter than usual.

In America, the song Somethin' Stupid by Nancy & Frank Sinatra is on top of the singles charts. Over in the UK, Puppet On A String by Sandie Shaw is the number one hit song. Lyndon Baines Johnson is currently the President of the United States and the movie A Man for All Seasons is at the top of the Box Office.

If you were to travel back to this day, notable figures such as Che Guevara, Otis Redding, Martin Luther King and Helen Keller would all be still alive. On TV, people are watching popular shows such as "The Ed Sullivan Show", "Steptoe and Son", "Gilligan's Island" and "Dark Shadows". Kids and teenagers are watching TV shows such as "Lassie", "Underdog", "Milton the Monster" and "JOT the Dot".

If you're a kid or a teenager, then you're probably playing with toys such as Ken (doll), Barrel of Monkeys, Operation and Best of the West (action figures).

Notable events that occurred around May 1st, 1967.

If you are looking for some childhood nostalgia, then check out May 1st, 1973 instead.

Irish politician.
Born on May 1st, 1969
She was born exactly 2 years after this date.

Social media personality.
Born on May 1st, 2004
She was born exactly 37 years after this date.

Lyndon Baines Johnson was the President of the United States on May 1st, 1967.

Harold Wilson was the Prime Minister of the United Kingdom on May 1st, 1967.

Enter your date of birth below to find out how old you were on May 1st, 1967.