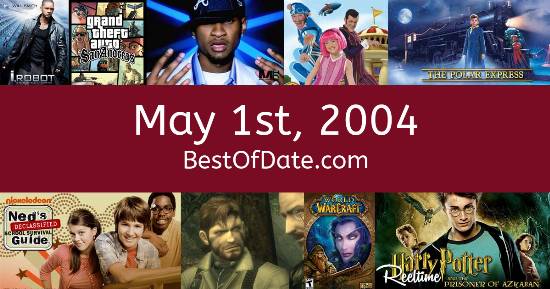 Songs that were on top of the music singles charts in the USA and the United Kingdom on May 1st, 2004.

The following comments about May 1st, 2004 were written by our visitors.

The date is May 1st, 2004, and it's a Saturday. Anyone born today will have the star sign Taurus. Currently, people are enjoying their weekend.

The summer of 2004 has finally arrived. The weather has warmed up and the evenings are brighter than usual. In America, the song Yeah by Usher is on top of the singles charts. Over in the UK, F**k It by Eamon is the number one hit song.

George W. Bush Jnr. is currently the President of the United States, and the movie Mean Girls is at the top of the Box Office. In the United Kingdom, Tony Blair is the current Prime Minister. In technology news, more and more people are beginning to gain access to the Internet. Internet speeds are increasing and MP3 sharing is beginning to threaten the existence of music stores.

It's 2004, so the music charts are being dominated by the likes of Usher, Alicia Keys, Maroon 5, OutKast, Mario Winans, the Terror Squad and Ciara. If you were to travel back to this day, notable figures such as Ronald Reagan, Ray Charles, Marlon Brando and Rick James would all be still alive. On TV, people are watching popular shows such as "Stargate SG-1", "Malcolm in the Middle", "Star Trek: Enterprise" and "Smallville".

Meanwhile, gamers are playing titles such as "RuneScape", "The Simpsons Hit & Run", "True Crime: Streets of LA" and "Tom Clancy's Splinter Cell: Pandora Tomorrow". Children and teenagers are currently watching television shows such as "Friends", "Johnny Bravo", "As Told by Ginger" and "The Cramp Twins". Popular toys at the moment include the likes of the PlayStation 2, the Xbox, Yu-Gi-Oh! Trading Card Game and VideoNow (portable player).

These are trending news stories and fads that were prevalent at this time. These are topics that would have been in the media on May 1st, 2004.

News stories and other events that happened around May 1st, 2004.

Check out our personality summary for people who were born on May 1st, 2004.

Television shows that people were watching in May, 2004.

Popular video games that people were playing in May of 2004.

If you are looking for some childhood nostalgia, then you should check out May 1st, 2010 instead.

Historical weather information for May 1st, 2004.

Tony Blair was the Prime Minister of the United Kingdom on May 1st, 2004.

Find out what your age was on May 1st, 2004, by entering your DOB below.
This information is not saved on our server.