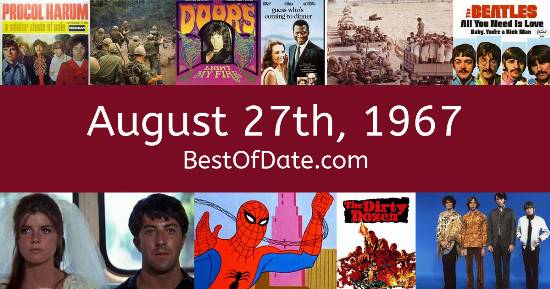 Songs that were on top of the music singles charts in the USA and the United Kingdom on August 27th, 1967.

The date is August 27th, 1967 and it's a Sunday. Anyone born today will have the star sign Virgo. Currently, people are enjoying their weekend.

The summer of 1967 is coming to an end and fall is just around the corner. In America, the song Ode To Billie Joe by Bobbie Gentry is on top of the singles charts. Over in the UK, San Francisco by Scott McKenzie is the number one hit song.

Lyndon Baines Johnson is currently the President of the United States and Harold Wilson is the Prime Minister of the United Kingdom. In fashion, a new "hippie subculture" has emerged, bringing with it laid back Bohemian styles. Frayed bell-bottomed jeans, Jesus sandals, crushed velvet suits and bright tie-dye t-shirts are all popular items of clothing at the moment. It's 1967, so radio stations are playing hit songs from artists such as Procol Harum, The Monkees, The Beatles, The Doors, Lulu and The Association.

A film called "Bonnie and Clyde" is being shown in movie theaters at the moment. On TV, people are watching popular shows such as "Gunsmoke", "The Andy Griffith Show", "Gilligan's Island" and "I Dream of Jeannie". Children and teenagers are currently watching television shows such as "My Three Sons", "Hoppity Hooper", "Star Trek: The Original Series" and "The New Adventures of Superman".

If you're a kid or a teenager, then you're probably playing with toys such as G.I. Joe: America's Movable Fighting Man, Barrel of Monkeys, Best of the West (action figures) and Battleship (game).

If you are looking for some childhood nostalgia, then check out August 27th, 1973 instead.

Celebrities, historical figures and notable people who were born on the 27th of August.

Lyndon Baines Johnson was the President of the United States on August 27th, 1967.

Harold Wilson was the Prime Minister of the United Kingdom on August 27th, 1967.

Enter your date of birth below to find out how old you were on August 27th, 1967.