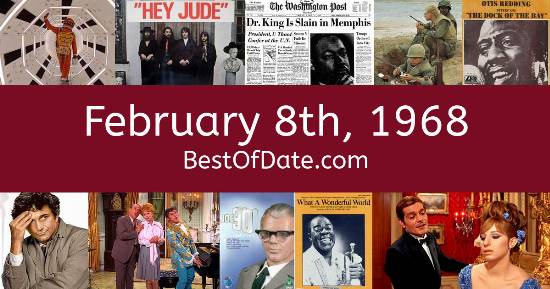 Songs that were on top of the music singles charts in the USA and the United Kingdom on February 8th, 1968.

The movie "Valley of the Dolls" was at the top of the box office on February 8th, 1968.

The date is February 8th, 1968 and it's a Thursday. Anyone born today will have the star sign Aquarius. Valentine's Day is just around the corner.

In America, the song Love Is Blue by Paul Mauriat is on top of the singles charts. Over in the UK, Everlasting Love by Love Affair is the number one hit song. Lyndon Baines Johnson is currently the President of the United States and the movie Valley of the Dolls is at the top of the Box Office.

If you were to travel back to this day, notable figures such as Martin Luther King, Helen Keller, Robert F. Kennedy and Dwight D. Eisenhower would all be still alive. On TV, people are watching popular shows such as "What's My Line?", "Gunsmoke", "The Andy Griffith Show" and "Batman". Children and teenagers are currently watching television shows such as "Captain Kangaroo", "Thunderbirds", "Atom Ant" and "The Herculoids".

If you're a kid or a teenager, then you're probably playing with toys such as Tonka trucks, Army men, Major Matt Mason (action figure) and Suzy Homemaker.

If you are looking for some childhood nostalgia, then check out February 8th, 1974 instead.

Wrestler.
Born on February 8th, 1972
He was born exactly 4 years after this date.

MMA fighter. Deceased
Born on February 8th, 1974
He was born exactly 6 years after this date.

Actor.
Born on February 8th, 1974
He was born exactly 6 years after this date.

Internet personality.
Born on February 8th, 2001
She was born exactly 33 years after this date.

Lyndon Baines Johnson was the President of the United States on February 8th, 1968.

Harold Wilson was the Prime Minister of the United Kingdom on February 8th, 1968.

Enter your date of birth below to find out how old you were on February 8th, 1968.

Here are some fun statistics about February 8th, 1968.

Have something to say about February 8th, 1968?