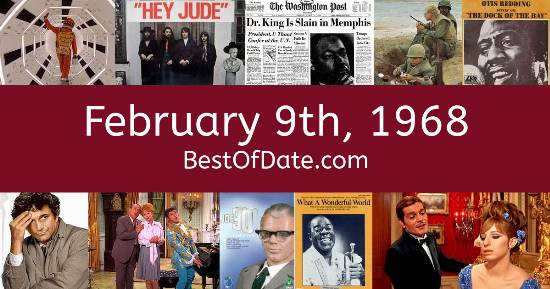 Songs that were on top of the music singles charts in the USA and the United Kingdom on February 9th, 1968.

The date is February 9th, 1968 and it's a Friday. Anyone born today will have the star sign Aquarius. Currently, people have "that Friday feeling" and are looking forward to the weekend.

Valentine's Day is just around the corner. In America, the song Love Is Blue by Paul Mauriat is on top of the singles charts. Over in the UK, Everlasting Love by Love Affair is the number one hit song.

On TV, people are watching popular shows such as "Gunsmoke", "Bonanza", "Batman" and "Rowan & Martin's Laugh-In". Children and teenagers are currently watching television shows such as "Heckle and Jeckle", "Atom Ant", "Milton the Monster" and "Spider-Man". Popular toys at the moment include the likes of Etch A Sketch, G.I. Joe: America's Movable Fighting Man, Best of the West (action figures) and Lite-Brite.

If you are looking for some childhood nostalgia, then check out February 9th, 1974 instead.

Lyndon Baines Johnson was the President of the United States on February 9th, 1968.

Harold Wilson was the Prime Minister of the United Kingdom on February 9th, 1968.

Enter your date of birth below to find out how old you were on February 9th, 1968.

Here are some fun statistics about February 9th, 1968.

Have something to say about February 9th, 1968?