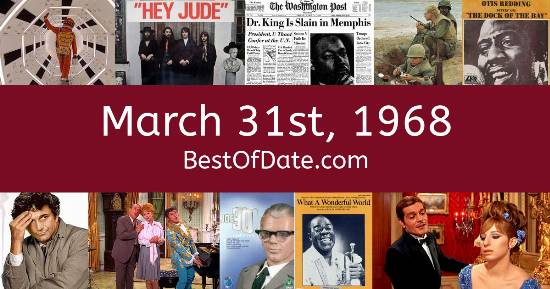 Songs that were on top of the music singles charts in the USA and the United Kingdom on March 31st, 1968.

The date is March 31st, 1968 and it's a Sunday. Anyone born today will have the star sign Aries. Currently, people are enjoying their weekend.

Spring has arrived and the days have become longer. In America, the song The Dock Of The Bay by Otis Redding is on top of the singles charts. Over in the UK, Lady Madonna by The Beatles is the number one hit song.

On TV, people are watching popular shows such as "The Ed Sullivan Show", "What's My Line?", "The Andy Griffith Show" and "Gilligan's Island". Children and teenagers are currently watching television shows such as "Captain Kangaroo", "Heckle and Jeckle", "My Three Sons" and "Spider-Man". If you're a kid or a teenager, then you're probably playing with toys such as Rock 'Em Sock 'Em Robots, Barrel of Monkeys, Major Matt Mason (action figure) and Best of the West (action figures).

Lyndon Baines Johnson was the President of the United States on March 31st, 1968.

Harold Wilson was the Prime Minister of the United Kingdom on March 31st, 1968.

Enter your date of birth below to find out how old you were on March 31st, 1968.

Leave a comment and tell everyone why March 31st, 1968 is important to you.