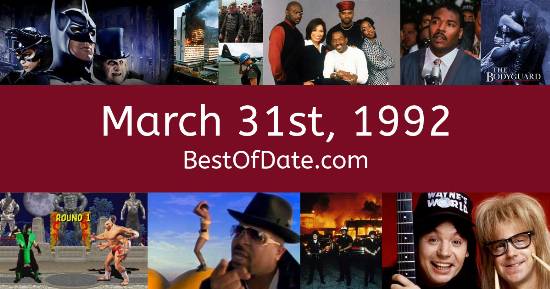 On March 31st, 1992, the following songs were at the top of the music charts in the USA and the UK.

The date is March 31st, 1992, and it's a Tuesday. Anyone born today will have the star sign Aries. Spring has arrived and the days have become longer.

The comedy film "White Men Can't Jump", starring Woody Harrelson and Wesley Snipes, has been released in movie theaters. German dance group "Snap!" have just released their new single "Rhythm Is a Dancer". The 64th Academy Awards have just been held in Los Angeles. The Silence of the Lambs (1991) has won "Best Picture", while Anthony Hopkins and Jodie Foster have both won Oscars for their acting performances in the movie.

In television, a new American news show called "Dateline NBC" has been aired for the first time. If you were to travel back to this day, notable figures such as Robert Reed, Anthony Perkins, Audrey Hepburn and Thurgood Marshall would all be still alive. On TV, people are watching popular shows such as "Sherlock Holmes", "The Golden Girls", "Family Matters" and "Baywatch".

Meanwhile, gamers are playing titles such as "Battletoads", "Sonic the Hedgehog", "F-16 Combat Pilot" and "The Legend of Zelda: A Link to the Past". Kids and teenagers are watching TV shows such as "Mister Rogers' Neighborhood", "Alvin and the Chipmunks", "Mr. Bean" and "Home Improvement". Popular toys at the moment include the likes of Screwball Scramble, the Ghostbusters Proton Pack, the Sega Genesis / Mega Drive and Yo-yo.

These are trending news stories and fads that were prevalent at this time. These are topics that would have been in the media on March 31st, 1992.

News stories and other events that happened around March 31st, 1992.

Check out our personality summary for people who were born on March 31st, 1992.

If you are looking for some childhood nostalgia, then you should check out March 31st, 1998 instead.

Find out what your age was on March 31st, 1992, by entering your DOB below.
This information is not saved on our server.