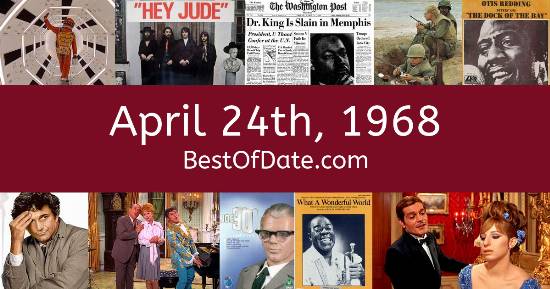 Songs that were on top of the music singles charts in the USA and the United Kingdom on April 24th, 1968.

The date is April 24th, 1968 and it's a Wednesday. Anyone born today will have the star sign Taurus. The summer of 1968 is drawing closer and temperatures have started to rise.

In America, the song Honey by Bobby Goldsboro is on top of the singles charts. Over in the UK, What A Wonderful World by Louis Armstrong is the number one hit song. Lyndon Baines Johnson is currently the President of the United States and the movie The Graduate is at the top of the Box Office.

If you were to travel back to this day, notable figures such as Helen Keller, Robert F. Kennedy, Dwight D. Eisenhower and Judy Garland would all be still alive. On TV, people are watching popular shows such as "What's My Line?", "Gilligan's Island", "I Dream of Jeannie" and "Rowan & Martin's Laugh-In". Kids and teenagers are watching TV shows such as "Lassie", "My Three Sons", "Star Trek: The Original Series" and "Aquaman".

If you're a kid or a teenager, then you're probably playing with toys such as the Easy-Bake Oven, Rock 'Em Sock 'Em Robots, Operation and Suzy Homemaker.

If you are looking for some childhood nostalgia, then check out April 24th, 1974 instead.

Lyndon Baines Johnson was the President of the United States on April 24th, 1968.

Harold Wilson was the Prime Minister of the United Kingdom on April 24th, 1968.

Enter your date of birth below to find out how old you were on April 24th, 1968.