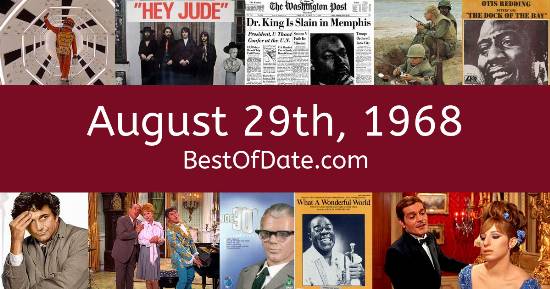 August 29th, 1968 relates to an event in a movie, book, game or television series:

Songs that were on top of the music singles charts in the USA and the United Kingdom on August 29th, 1968:

The date is August 29th, 1968 and it's a Thursday. Anyone born today will have the star sign Virgo. The summer of 1968 is coming to an end and fall is just around the corner.

In America, the song People Got To Be Free by Rascals is on top of the singles charts. Over in the UK, Do It Again by Beach Boys is the number one hit song. Lyndon Baines Johnson is currently the President of the United States and Harold Wilson is the Prime Minister of the United Kingdom.

In fashion, a new "hippie subculture" has emerged, bringing with it laid back Bohemian styles. Frayed bell-bottomed jeans, Jesus sandals, crushed velvet suits and bright tie-dye t-shirts are all popular items of clothing at the moment. It's 1968, so radio stations are playing hit songs from artists such as The Beatles, Louis Armstrong, Otis Redding, The Rolling Stones, Bobby Goldsboro and Marvin Gaye. A new song called "Hey Jude" has just been released by English rock band The Beatles.

On TV, people are watching popular shows such as "What's My Line?", "Gunsmoke", "Gilligan's Island" and "Columbo.". Children and teenagers are currently watching television shows such as "Heckle and Jeckle", "Underdog", "Milton the Monster" and "Mister Rogers' Neighborhood". If you're a kid or a teenager, then you're probably playing with toys such as "Etch A Sketch", "Motorific (slot car toys)", "Barrel of Monkeys" and "Lite-Brite".

Children's and Teen TV shows that would have been airing on this date in 1968.

Toys and games that would have been popular on this date in 1968:

Who was the Prime Minister of the United Kingdom on August 29th, 1968?

Enter your date of birth below to find out how old you were on August 29th, 1968.

Looking for some nostalgia? Here are some Youtube videos relating to August 29th, 1968. Please note that videos are automatically selected by Youtube and that results may vary! Click on the "Load Next Video" button to view the next video in the search playlist. In many cases, you'll find episodes of old TV shows, documentaries, music videos and soap dramas.