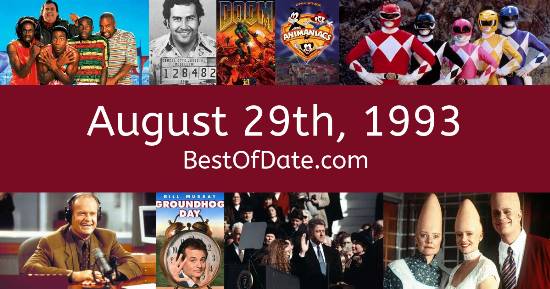 On August 29th, 1993, the following songs were at the top of the music charts in the USA and the UK.

The top "Box Office" movie on this date was the film "Rising Sun".

The date is August 29th, 1993, and it's a Sunday. Anyone born today will have the star sign Virgo. Currently, people are enjoying their weekend.

The summer of 1993 is coming to an end and fall is just around the corner. In America, the song Can't Help Falling In Love by UB40 is on top of the singles charts. Over in the UK, Living On My Own by Freddie Mercury is the number one hit song.

Bill Clinton is currently the President of the United States, and the movie Rising Sun is at the top of the Box Office. In the United Kingdom, John Major is the current Prime Minister. Texting is not a thing yet. Instead, people are using landline phones and pagers. Furthermore, the vast majority of people still have no idea what "the Internet" is.

A playing discs game called "Pogs" is currently spreading in popularity throughout the world. It's 1993, so radio stations are being dominated by the likes of Meat Loaf, UB40, Snow, Haddaway, Whitney Houston, Take That, Janet Jackson and Mariah Carey. It has been announced that NASA has lost radio contact with its spacecraft the Mars Observer. The loss in communication occurred just days before it was due to begin entry into the planet's atmosphere.

People are currently shocked by recent news reports that pop icon Michael Jackson is currently under investigation for child sexual abuse. In response to the claims, Jackson has labelled them as "extortion". In television news, a new children's show called the "Mighty Morphin Power Rangers" has recently made its debut. If you were to travel back to this day, notable figures such as Vincent Price, River Phoenix, Frank Zappa and Bill Hicks would all be still alive.

On TV, people are watching popular shows such as "Sherlock Holmes", "Roseanne", "Dinosaurs" and "Star Trek: Deep Space Nine". Meanwhile, gamers are playing titles such as "The Legend of Zelda: A Link to the Past", "Kirby's Dream Land", "Bubsy in Claws Encounters of the Furred Kind" and "Mighty Final Fight". Kids and teenagers are watching TV shows such as "Teenage Mutant Ninja Turtles", "Clarissa Explains It All", "The Ren & Stimpy Show" and "Living Single".

If you're a kid or a teenager, then you're probably playing with toys such as Cabbage Patch Kids, Pogo ball / Lolo ball, Jenga and the Game Boy.

These are trending news stories and fads that were prevalent at this time. These are topics that would have been in the media on August 29th, 1993.

News stories and other events that happened around August 29th, 1993.

Check out our personality summary for people who were born on August 29th, 1993.

Television shows that people were watching in August, 1993.

Popular video games that people were playing in August of 1993.

If you are looking for some childhood nostalgia, then you should check out August 29th, 1999 instead.

Bill Clinton was the President of the United States on August 29th, 1993.

Find out what your age was on August 29th, 1993, by entering your DOB below.
This information is not saved on our server.