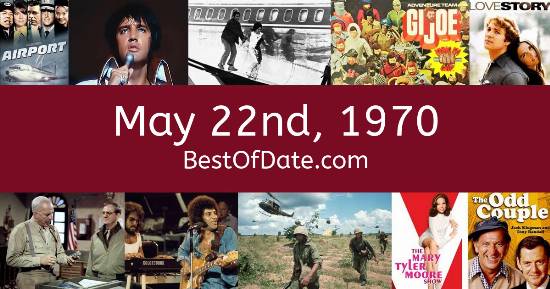 These songs were on top of the music charts in the United States and the United Kingdom on May 22nd, 1970.

The date is May 22nd, 1970, and it's a Friday. Anyone born today will have the star sign Gemini. Currently, people have "that Friday feeling" and are looking forward to the weekend.

The summer of 1970 has finally arrived. The weather has warmed up and the evenings are brighter than usual. In America, the song American Woman by Guess Who is on top of the singles charts. Over in the UK, Back Home by England World Cup Squad is the number one hit song.

In fashion, the hippie look from the 1960s is still popular. Clothing items such as tie dye shirts, bell-bottoms, midi skirts, gauchos and Mexican blouses are being worn by women. Meanwhile, men are wearing dark satin shirts, ethnic-looking tunics, bell bottom jeans, tweed sports jackets and turtlenecks. If you were to travel back to this day, notable figures such as Jimi Hendrix, Janis Joplin, Charles de Gaulle and Sonny Liston would all be still alive. On TV, people are watching popular shows such as "The Ed Sullivan Show", "Steptoe and Son", "Hawaii Five-O" and "Room 222".

Children and teenagers are currently watching television shows such as "My Three Sons", "The Banana Splits", "The Adventures of Gulliver" and "Skyhawks". If you're a kid or a teenager, then you're probably playing with toys such as Twister mat, Crissy (doll), Frisbee and Snoopy Astronaut (figure).

These are trending news stories and fads that were prevalent at this time. These are topics that would have been in the media on May 22nd, 1970.

Check out our personality summary for people who were born on May 22nd, 1970.

If you are looking for some childhood nostalgia, then you should check out May 22nd, 1976 instead.

Internet personality.
Born on May 22nd, 2001
She was born exactly 31 years after this date.

Richard Nixon was the President of the United States on May 22nd, 1970.

Harold Wilson was the Prime Minister of the United Kingdom on May 22nd, 1970.

Enter your date of birth below to find out how old you were on May 22nd, 1970.
This information is not transmitted to our server.