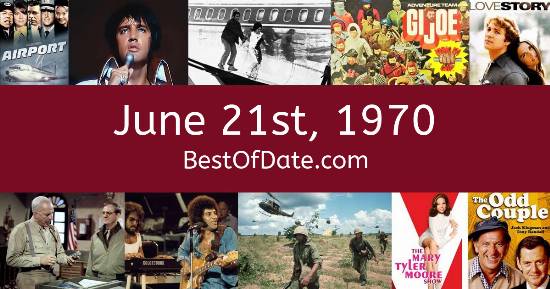 Songs that were on top of the music singles charts in the USA and the United Kingdom on June 21st, 1970.

The date is June 21st, 1970 and it's a Sunday. Anyone born today will have the star sign Cancer. Currently, people are enjoying their weekend.

It's summer, so the temperatures are warmer and the evenings are longer than usual. In America, the song The Long And Winding Road by The Beatles is on top of the singles charts. Over in the UK, In The Summertime by Mungo Jerry is the number one hit song.

Richard Nixon is currently the President of the United States and the movie A Man Called Horse is at the top of the Box Office. In the United Kingdom, Edward Heath is the current Prime Minister. It's 1970, so radio stations are playing hit songs from artists such as Elvis Presley, Mungo Jerry, Shocking Blue, Diana Ross, Simon & Garfunkel, The Jackson 5 and The Carpenters.

Children and teenagers are currently watching television shows such as "Lassie", "Captain Kangaroo", "The Bugs Bunny Show" and "Spider-Man". If you're a kid or a teenager, then you're probably playing with toys such as the Easy-Bake Oven, Lite-Brite, Crissy (doll) and Nerf Balls.

If you are looking for some childhood nostalgia, then check out June 21st, 1976 instead.

American whistleblower.
Born on June 21st, 1983
He was born exactly 13 years after this date.

Richard Nixon was the President of the United States on June 21st, 1970.

Edward Heath was the Prime Minister of the United Kingdom on June 21st, 1970.