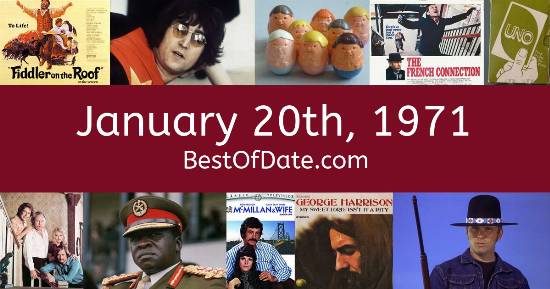 Songs that were on top of the music singles charts in the USA and the United Kingdom on January 20th, 1971.

The date is January 20th, 1971 and it's a Wednesday. Anyone born today will have the star sign Aquarius. In America, the song My Sweet Lord by George Harrison is on top of the singles charts.

On TV, people are watching popular shows such as "The Ed Sullivan Show", "Gunsmoke", "Medical Center" and "The Brady Bunch". Children and teenagers are currently watching television shows such as "My Three Sons", "Underdog", "The Pink Panther Show" and "Sesame Street". If you're a kid or a teenager, then you're probably playing with toys such as Troll doll, Etch A Sketch, Battleship (game) and Nerf Balls.

If you are looking for some childhood nostalgia, then check out January 20th, 1977 instead.

Richard Nixon was the President of the United States on January 20th, 1971.

Edward Heath was the Prime Minister of the United Kingdom on January 20th, 1971.

Enter your date of birth below to find out how old you were on January 20th, 1971.

Here are some fun statistics about January 20th, 1971.