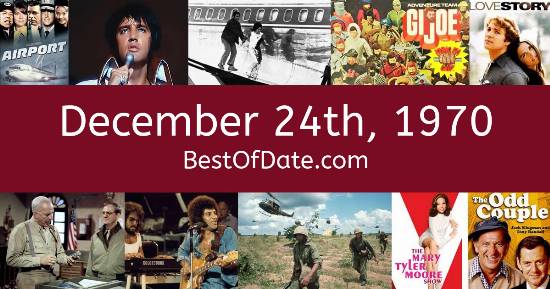 Songs that were on top of the music singles charts in the USA and the United Kingdom on December 24th, 1970.

The date is December 24th, 1970 and it's a Thursday. Anyone born today will have the star sign Capricorn. It's Christmas Eve of 1970. The big day is fast approaching and the excitement is building. Department stores are thronged with people who are trying to do some last-minute shopping.

In America, the song My Sweet Lord by George Harrison is on top of the singles charts. Over in the UK, I Hear You Knocking by Dave Edmunds is the number one hit song. Richard Nixon is currently the President of the United States and the movie Scrooge is at the top of the Box Office.

The romantic drama film "Love Story" is currently being shown in movie theaters. If you were to travel back to this day, notable figures such as Sonny Liston, Coco Chanel, Igor Stravinsky and Jim Morrison would all be still alive. On TV, people are watching popular shows such as "The Ed Sullivan Show", "Gunsmoke", "Columbo." and "McCloud".

Children and teenagers are currently watching television shows such as "Captain Kangaroo", "Mister Rogers' Neighborhood", "Sesame Street" and "The Clangers". If you're a kid or a teenager, then you're probably playing with toys such as Motorific (slot car toys), Suzy Homemaker, Clackers and Nerf Balls.

If you are looking for some childhood nostalgia, then check out December 24th, 1976 instead.

Singer.
Born on December 24th, 1971
He was born exactly one year after this date.

Radio personality.
Born on December 24th, 1974
He was born exactly 4 years after this date.

Richard Nixon was the President of the United States on December 24th, 1970.

Edward Heath was the Prime Minister of the United Kingdom on December 24th, 1970.

Enter your date of birth below to find out how old you were on December 24th, 1970.

Here are some fun statistics about December 24th, 1970.