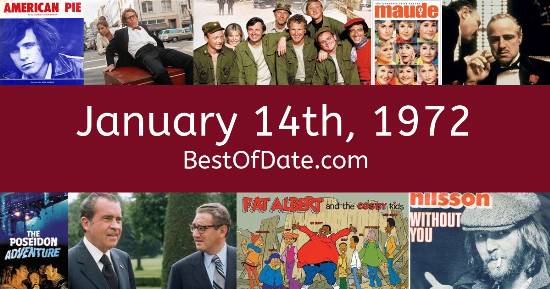 Songs that were on top of the music singles charts in the USA and the United Kingdom on January 14th, 1972.

The movie "Diamonds Are Forever" was at the top of the box office on January 14th, 1972.

The date is January 14th, 1972 and it's a Friday. Anyone born today will have the star sign Capricorn. Currently, people have "that Friday feeling" and are looking forward to the weekend.

The Christmas holiday season is long over, the decorations have been taken down and a sense of normality has returned. In America, the song Brand New Key by Melanie is on top of the singles charts. Over in the UK, I'd Like To Teach The World To Sing by New Seekers is the number one hit song.

Richard Nixon is currently the President of the United States and the movie Diamonds Are Forever is at the top of the Box Office. In the United Kingdom, Edward Heath is the current Prime Minister. In fashion, the hippie look from the 1960s is still popular. Clothing items such as tie dye shirts, bell-bottoms, midi skirts, gauchos and Mexican blouses are being worn by women. Meanwhile, men are wearing dark satin shirts, ethnic-looking tunics, bell bottom jeans, tweed sports jackets and turtlenecks.

It's 1972, so radio stations are playing songs from artists such as Don McLean, Harry Nilsson, Hot Butter, Neil Young, The Moody Blues, Roberta Flack, Bill Withers and Johnny Nash. If you were to travel back to this day, notable figures such as J. Edgar Hoover, Jackie Robinson, Harry S. Truman and Lyndon B. Johnson would all be still alive. On TV, people are watching popular shows such as "Adam-12", "Here's Lucy", "McCloud" and "The Odd Couple".

Children and teenagers are currently watching television shows such as "The Clangers", "Josie and the Pussycats", "Groovie Goolies" and "Help!... It's the Hair Bear Bunch!". If you're a kid or a teenager, then you're probably playing with toys such as Operation, Suzy Homemaker, VertiBird (toy helicopter) and Big Jim (action figure).

If you are looking for some childhood nostalgia, then check out January 14th, 1978 instead.

Richard Nixon was the President of the United States on January 14th, 1972.

Edward Heath was the Prime Minister of the United Kingdom on January 14th, 1972.

Enter your date of birth below to find out how old you were on January 14th, 1972.

Here are some fun statistics about January 14th, 1972.