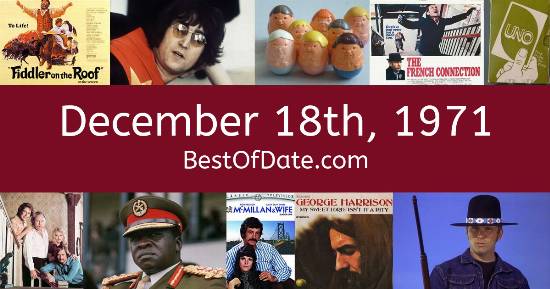 Songs that were on top of the music singles charts in the USA and the United Kingdom on December 18th, 1971.

The date is December 18th, 1971 and it's a Saturday. Anyone born today will have the star sign Sagittarius. Currently, people are enjoying their weekend.

The Christmas season of 1971 is in full swing. The decorations are up and festive songs are playing on the radio. In America, the song Family Affair by Sly & Family Stone is on top of the singles charts. Over in the UK, Ernie by Benny Hill is the number one hit song.

The James Bond film "Diamonds Are Forever" is currently being shown in movie theaters. On TV, people are watching popular shows such as "McCloud", "All in the Family", "The Sonny & Cher Comedy Hour" and "Upstairs, Downstairs". Kids and teenagers are watching TV shows such as "JOT the Dot", "Mister Rogers' Neighborhood", "The Brady Bunch" and "The Clangers".

Popular toys at the moment include the likes of Motorific (slot car toys), Lite-Brite, Battleship (game) and Nerf Balls.

If you are looking for some childhood nostalgia, then check out December 18th, 1977 instead.

Richard Nixon was the President of the United States on December 18th, 1971.

Edward Heath was the Prime Minister of the United Kingdom on December 18th, 1971.

Enter your date of birth below to find out how old you were on December 18th, 1971.

Here are some fun statistics about December 18th, 1971.