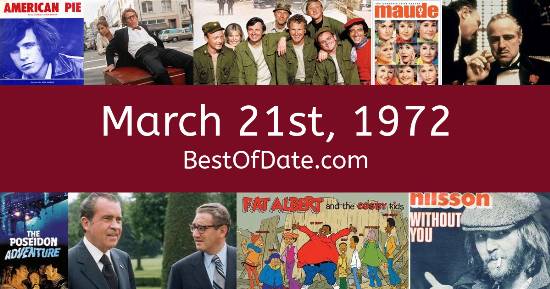 Songs that were on top of the music singles charts in the USA and the United Kingdom on March 21st, 1972.

The date is March 21st, 1972 and it's a Tuesday. Anyone born today will have the star sign Aries. Spring has arrived and the days have become longer.

St. Patrick's Day of 1972 has recently come and gone. In America, the song Heart Of Gold by Neil Young is on top of the singles charts. Over in the UK, Without You by Nilsson is the number one hit song.

On TV, people are watching popular shows such as "Bonanza", "McMillan & Wife", "Upstairs, Downstairs" and "Emergency!". Kids and teenagers are watching TV shows such as "Captain Kangaroo", "My Three Sons", "Mister Rogers' Neighborhood" and "The Clangers". Popular toys at the moment include the likes of Motorific (slot car toys), Battleship (game), Clackers and VertiBird (toy helicopter).

Celebrities, historical figures and notable people who were born on the 21st of March.

Richard Nixon was the President of the United States on March 21st, 1972.

Edward Heath was the Prime Minister of the United Kingdom on March 21st, 1972.

Enter your date of birth below to find out how old you were on March 21st, 1972.

Leave a comment and tell everyone why March 21st, 1972 is important to you.