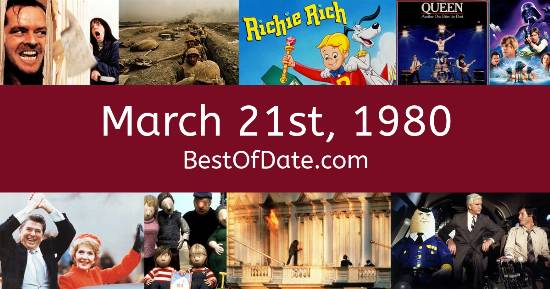 These songs were on top of the music charts in the United States and the United Kingdom on March 21st, 1980.

The top "Box Office" movie on this date was the film "Coal Miner's Daughter".

The date is March 21st, 1980, and it's a Friday. Anyone born today will have the star sign Aries. Currently, people have "that Friday feeling" and are looking forward to the weekend.

Spring has arrived and the days have become longer. St. Patrick's Day of 1980 has recently come and gone. In America, the song Another Brick In The Wall by Pink Floyd is on top of the singles charts.

Over in the UK, Going Underground / Dreams Of Children by Jam is the number one hit song. Jimmy Carter is currently the President of the United States, and the movie Coal Miner's Daughter is at the top of the Box Office. In the United Kingdom, Margaret Thatcher is the current Prime Minister.

On TV, people are watching popular shows such as "The Jeffersons", "Soap", "Hart to Hart" and "Archie Bunker's Place". Meanwhile, gamers are playing titles such as "Breakout", "Space Invaders", "Lunar Lander" and "Asteroids". Children and teenagers are currently watching television shows such as "Captain Kangaroo", "Schoolhouse Rock!", "Happy Days" and "The New Adventures of Flash Gordon".

Popular toys at the moment include the likes of the Easy-Bake Oven, Operation, Star Wars action figures and Simon (memory game).

These are trending news stories and fads that were prevalent at this time. These are topics that would have been in the media on March 21st, 1980.

News stories and other events that happened around March 21st, 1980.

Check out our personality summary for people who were born on March 21st, 1980.

Television shows that people were watching in March, 1980.

Popular video games that people were playing in March of 1980.

If you are looking for some childhood nostalgia, then you should check out March 21st, 1986 instead.

Soccer player.
Born on March 21st, 1989
He was born exactly 9 years after this date.

Jimmy Carter was the President of the United States on March 21st, 1980.

Margaret Thatcher was the Prime Minister of the United Kingdom on March 21st, 1980.

Find out what your age was on March 21st, 1980, by entering your DOB below.
This information is not saved on our server.