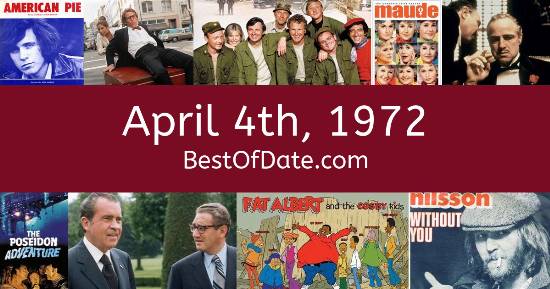 April 4th, 1972 relates to a fictional event in a movie, book, game or television series.

Songs that were on top of the music singles charts in the USA and the United Kingdom on April 4th, 1972.

The date is April 4th, 1972 and it's a Tuesday. Anyone born today will have the star sign Aries. The summer of 1972 is drawing closer and temperatures have started to rise.

In America, the song A Horse With No Name by America is on top of the singles charts. Over in the UK, Without You by Nilsson is the number one hit song. Richard Nixon is currently the President of the United States and Edward Heath is the Prime Minister of the United Kingdom.

On TV, people are watching popular shows such as "What's My Line?", "Rowan & Martin's Laugh-In", "The Odd Couple" and "McMillan & Wife". Kids and teenagers are watching TV shows such as "My Three Sons", "JOT the Dot", "The Pink Panther Show" and "Sesame Street". If you're a kid or a teenager, then you're probably playing with toys such as Etch A Sketch, Suzy Homemaker, Battleship (game) and Uno (card game).

If you are looking for some childhood nostalgia, then check out April 4th, 1978 instead.

Celebrities, historical figures and notable people who were born on the 4th of April.

Richard Nixon was the President of the United States on April 4th, 1972.

Edward Heath was the Prime Minister of the United Kingdom on April 4th, 1972.

Enter your date of birth below to find out how old you were on April 4th, 1972.

Here are some fun statistics about April 4th, 1972.