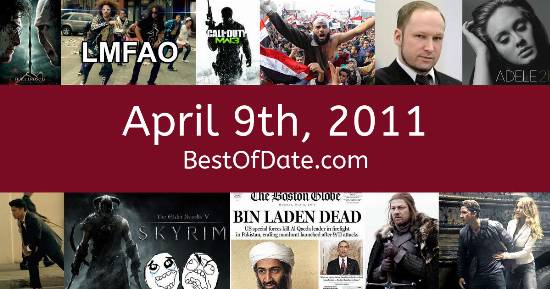 Songs that were on top of the music singles charts in the USA and the United Kingdom on April 9th, 2011.

The date is April 9th, 2011 and it's a Saturday. Anyone born today will have the star sign Aries. Currently, people are enjoying their weekend.

The summer of 2011 is drawing closer and temperatures have started to rise. In America, the song Born This Way by Lady Gaga is on top of the singles charts. Over in the UK, On The Floor by Jennifer Lopez is the number one hit song.

Barack Obama is currently the President of the United States and the movie Hop is at the top of the Box Office. In the United Kingdom, David Cameron is the current Prime Minister. The term "hipster" is currently growing in use. The word is being used to describe people who are pretentious and deliberately anti-mainstream.

Anti-government protests are currently taking place in cities across Syria. A civil war is raging on in Libya. Large battles are taking place between Colonel Gaddafi's government forces and Libyan rebels, who are being supported by NATO. The recent discovery of eight bodies near Gilgo Beach in New York are raising fears about a Craigslist serial killer.

The Netherlands is in shock after a gunman kills five people in a mass shooting at the Ridderhof mall in Alphen aan den Rijn. On TV, people are watching popular shows such as "Futurama", "Smallville", "Prison Break" and "Jersey Shore". Meanwhile, gamers are playing titles such as "Fallout: New Vegas", "Assassin's Creed: Brotherhood", "Homefront" and "Crysis 2".

Kids and teenagers are watching TV shows such as "Peppa Pig", "Mickey Mouse Clubhouse", "iCarly" and "Good Luck Charlie". Popular toys at the moment include the likes of the Xbox 360, the PlayStation 3 and the iPad.

Barack Obama was the President of the United States on April 9th, 2011.

David Cameron was the Prime Minister of the United Kingdom on April 9th, 2011.

Enter your date of birth below to find out how old you were on April 9th, 2011.

Here are some fun statistics about April 9th, 2011.

Leave a comment and tell everyone why April 9th, 2011 is important to you.