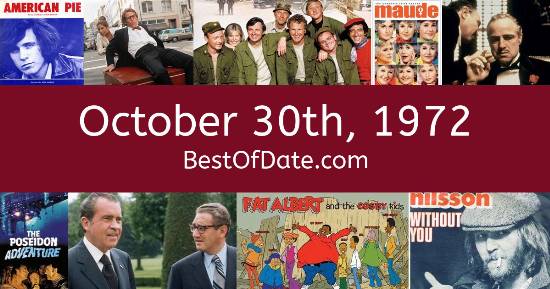 Songs that were on top of the music singles charts in the USA and the United Kingdom on October 30th, 1972:

The date is October 30th, 1972 and it's a Monday. Anyone born today will have the star sign Scorpio. The summer is long gone. Temperatures have started to become much cooler and the evenings are beginning to get darker.

Fallen leaves have carpeted driveways, lawns, pathways and sidewalks and there's a fresh earthy scent in the ear. Halloween of 1972 is just days away. People are watching horror movies and thinking about which costume they are going to wear. Others are organizing parties. In America, the song My Ding-a-ling by Chuck Berry is on top of the singles charts.

Over in the UK, Mouldy Old Dough by Lt. Pigeon is the number one hit song. Richard Nixon is currently the President of the United States and Edward Heath is the Prime Minister of the United Kingdom. In fashion, the hippie look from the 1960s is still popular. Clothing items such as tie dye shirts, bell-bottoms, midi skirts, gauchos and Mexican blouses are being worn by women. Meanwhile, men are wearing dark satin shirts, ethnic-looking tunics, bell bottom jeans, tweed sports jackets and turtlenecks.

It's 1972, so radio stations are playing songs from artists such as Don McLean, Harry Nilsson, Hot Butter, Neil Young, The Moody Blues, Roberta Flack, Bill Withers and Johnny Nash. Incumbent Republican president Richard Nixon and Democratic Party candidate George McGovern are facing off against each other in the run up to the 1972 US Presidential Election. On TV, people are watching popular shows such as "Marcus Welby, M.D.", "The Brady Bunch", "Maude" and "M*A*S*H".

Children and teenagers are currently watching television shows such as "Underdog", "Mister Rogers' Neighborhood", "The Brady Bunch" and "Fat Albert and the Cosby Kids". If you're a kid or a teenager, then you're probably playing with toys such as "Easy-Bake Oven", "Battleship (game)", "Clackers" and "VertiBird (toy helicopter)".

National holidays and famous events that fall on the 30th of October:

Who was the Prime Minister of the United Kingdom on October 30th, 1972?

Enter your date of birth below to find out how old you were on October 30th, 1972.

Looking for some nostalgia? Here are some Youtube videos relating to October 30th, 1972. Please note that videos are automatically selected by Youtube and that results may vary! Click on the "Load Next Video" button to view the next video in the search playlist. In many cases, you'll find episodes of old TV shows, documentaries, music videos and soap dramas.

Here are some fun statistics about October 30th, 1972.