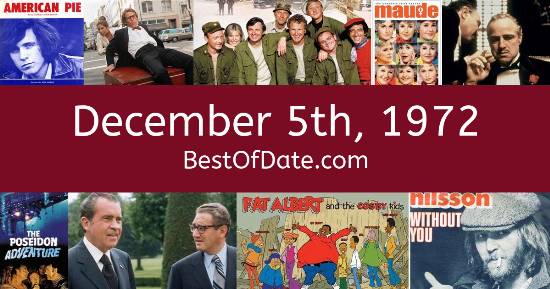 Songs that were on top of the music singles charts in the USA and the United Kingdom on December 5th, 1972.

The movie "Lady Sings the Blues" was at the top of the Box Office on December 5th, 1972.

The date is December 5th, 1972, and it's a Tuesday. Anyone born today will have the star sign Sagittarius. The Christmas season of 1972 has began.

In America, the song Papa Was A Rolling Stone by Temptations is on top of the singles charts. Over in the UK, My Ding-a-ling by Chuck Berry is the number one hit song. Richard Nixon is currently the President of the United States, and the movie Lady Sings the Blues is at the top of the Box Office.

If you were to travel back to this day, notable figures such as Harry S. Truman, Lyndon B. Johnson, Pablo Picasso and Bruce Lee would all be still alive. On TV, people are watching popular shows such as "The Main Chance", "Marcus Welby, M.D.", "The Flip Wilson Show" and "M*A*S*H". Meanwhile, gamers are playing titles such as "Pong".

Kids and teenagers are watching TV shows such as "Groovie Goolies", "All in the Family", "The Pebbles and Bamm-Bamm Show" and "Lassie's Rescue Rangers". Popular toys at the moment include the likes of Suzy Homemaker, Crissy (doll), VertiBird (toy helicopter) and Kenner SSP Racers.

These are trending news stories and fads that were prevalent at this time. These are topics that would have been in the media on December 5th, 1972.

News stories and other events that happened around December 5th, 1972.

Check out our personality summary for people who were born on December 5th, 1972.

If you are looking for some childhood nostalgia, then you should check out December 5th, 1978 instead.

English snooker player.
Born on December 5th, 1975
He was born exactly 3 years after this date.

Soccer player.
Born on December 5th, 1995
He was born exactly 23 years after this date.

American YouTuber.
Born on December 5th, 2004
She was born exactly 32 years after this date.

Richard Nixon was the President of the United States on December 5th, 1972.

Edward Heath was the Prime Minister of the United Kingdom on December 5th, 1972.

Find out what your age was on December 5th, 1972, by entering your DOB below.
This information is not saved on our server.

Here are some fun statistics about December 5th, 1972.