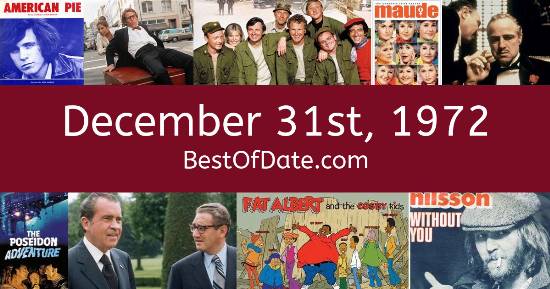 On December 31st, 1972, the following songs were at the top of the music charts in the USA and the UK.

The date is December 31st, 1972, and it's a Sunday. Anyone born today will have the star sign Capricorn. Currently, people are enjoying their weekend.

It's News Years Eve and everyone is looking forward to what the year 1973 will bring them. In America, the song Me And Mrs. Jones by Billy Paul is on top of the singles charts. Over in the UK, Long Haired Lover From Liverpool by Little Jimmy Osmond is the number one hit song.

On TV, people are watching popular shows such as "Columbo", "The Flip Wilson Show", "Maude" and "M*A*S*H". Meanwhile, gamers are playing titles such as "Pong". Children and teenagers are currently watching television shows such as "Underdog", "Sabrina the Teenage Witch", "The Adventures of Black Beauty" and "Lassie's Rescue Rangers".

Popular toys at the moment include the likes of the Easy-Bake Oven, Army men, Crissy (doll) and Shrinky Dinks.

These are trending news stories and fads that were prevalent at this time. These are topics that would have been in the media on December 31st, 1972.

News stories and other events that happened around December 31st, 1972.

Check out our personality summary for people who were born on December 31st, 1972.

If you are looking for some childhood nostalgia, then you should check out December 31st, 1978 instead.

South Korean singer.
Born on December 31st, 1977
He was born exactly 5 years after this date.

American businessman.
Born on December 31st, 1977
He was born exactly 5 years after this date.

Richard Nixon was the President of the United States on December 31st, 1972.

Edward Heath was the Prime Minister of the United Kingdom on December 31st, 1972.

Find out what your age was on December 31st, 1972, by entering your DOB below.
This information is not saved on our server.

Here are some fun statistics about December 31st, 1972.