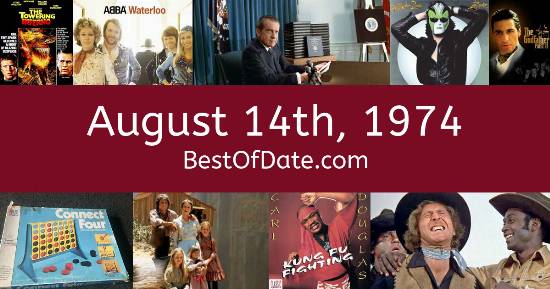 Songs that were on top of the music singles charts in the USA and the United Kingdom on August 14th, 1974.

The date is August 14th, 1974 and it's a Wednesday. Anyone born today will have the star sign Leo. It's summer, so the temperatures are warmer and the evenings are longer than usual.

In America, the song The Night Chicago Died by Paper Lace is on top of the singles charts. Over in the UK, When Will I See You Again by Three Degrees is the number one hit song. Gerald Ford is currently the President of the United States and the movie Return of the Dragon is at the top of the Box Office.

If you were to travel back to this day, notable figures such as Oskar Schindler and Eamon de Valera would be still alive. On TV, people are watching popular shows such as "What's My Line?", "Marcus Welby, M.D.", "All in the Family" and "The Six Million Dollar Man". Meanwhile, gamers are playing titles such as "Pong", "Space Race" and "Gotcha".

Kids and teenagers are watching TV shows such as "The Brady Bunch", "Schoolhouse Rock!", "Bailey's Comets" and "Happy Days". Popular toys at the moment include the likes of Etch A Sketch, Operation, Battleship (game) and Shrinky Dinks.

If you are looking for some childhood nostalgia, then check out August 14th, 1980 instead.

Actress.
Born on August 14th, 1983
She was born exactly 9 years after this date.

Social media personality.
Born on August 14th, 1999
He was born exactly 25 years after this date.

Gerald Ford was the President of the United States on August 14th, 1974.

Harold Wilson was the Prime Minister of the United Kingdom on August 14th, 1974.

Enter your date of birth below to find out how old you were on August 14th, 1974.