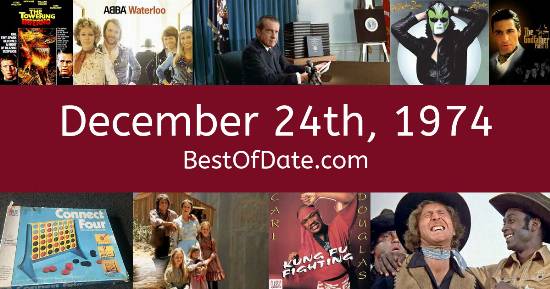 On December 24th, 1974, the following songs were at the top of the music charts in the USA and the UK.

The top "Box Office" movie on this date was the film "Death Wish".

The date is December 24th, 1974, and it's a Tuesday. Anyone born today will have the star sign Capricorn. It's Christmas Eve of 1974. The big day is fast approaching and the excitement is building. Department stores are thronged with people who are trying to do some last-minute shopping.

In America, the song Angie Baby by Helen Reddy is on top of the singles charts. Over in the UK, Lonely This Christmas by Mud is the number one hit song. Gerald Ford is currently the President of the United States, and the movie Death Wish is at the top of the Box Office.

The films "The Godfather Part II" and "The Towering Inferno" are being shown in movie theaters at the moment. If you were to travel back to this day, notable figures such as Eamon de Valera would be still alive. On TV, people are watching popular shows such as "Columbo", "The Main Chance", "All in the Family" and "McMillan & Wife".

Meanwhile, gamers are playing titles such as "Pong", "Space Race", "Gotcha" and "Tank". Children and teenagers are currently watching television shows such as "JOT the Dot", "Dastardly and Muttley in Their Flying Machines", "Scooby-Doo, Where Are You!" and "Schoolhouse Rock!". If you're a kid or a teenager, then you're probably playing with toys such as Battleship (game), VertiBird (toy helicopter), Baby Alive (doll) and Shrinky Dinks.

These are trending news stories and fads that were prevalent at this time. These are topics that would have been in the media on December 24th, 1974.

Check out our personality summary for people who were born on December 24th, 1974.

Television shows that people were watching in December, 1974.

Popular video games that people were playing in December of 1974.

If you are looking for some childhood nostalgia, then you should check out December 24th, 1980 instead.

Gerald Ford was the President of the United States on December 24th, 1974.

Harold Wilson was the Prime Minister of the United Kingdom on December 24th, 1974.

Enter your date of birth below to find out how old you were on December 24th, 1974.
This information is not transmitted to our server.

Here are some fun statistics about December 24th, 1974.