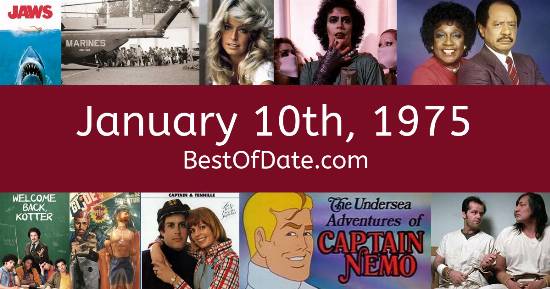 Songs that were on top of the music singles charts in the USA and the United Kingdom on January 10th, 1975:

The date is January 10th, 1975 and it's a Friday. Anyone born today will have the star sign Capricorn. Currently, people have "that Friday feeling" and are looking forward to the weekend.

The Christmas holidays are long over, the decorations have been taken down and a sense of normality has returned. In America, the song Lucy In The Sky With Diamonds by Elton John is on top of the singles charts. Over in the UK, Lonely This Christmas by Mud is the number one hit song.

Gerald Ford is currently the President of the United States and Harold Wilson is the Prime Minister of the United Kingdom. Because it's 1975, the music charts are being dominated by the likes of Billy Swan, 10cc, Alain Barriere, Morris Albert, the Salsoul Orchestra, Captain & Tennille, Elton John and David Bowie. People are watching popular TV shows such as "Columbo.", "Good Times", "Kolchak: The Night Stalker" and "The Rockford Files".

Celebrities and historical figures that were born on the 10th of January:

Who was the Prime Minister of the United Kingdom on January 10th, 1975?

Enter your date of birth below to find out how old you were on January 10th, 1975.

Looking for some nostalgia? Here are some Youtube videos relating to January 10th, 1975. Please note that videos are automatically selected by Youtube and that results may vary! Click on the "Load Next Video" button to view the next video in the search playlist. In many cases, you'll find episodes of old TV shows, documentaries, music videos and soap dramas.

Here are some fun statistics about January 10th, 1975.