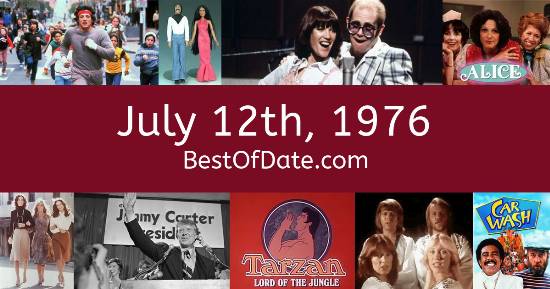 Songs that were on top of the music singles charts in the USA and the United Kingdom on July 12th, 1976.

I was eight years old on this date. The day our family went to view an Orange parade, in which I stole the show by being knocked down by a car. It was a warm day.
Posted on October 4th, 2021 23:45

A longtime family friend was on the first episode of "Family Feud", which aired on this day. Although their family didn't win, it was still a memory they cherished until their passing in the mid-2000s.
Posted on December 11th, 2021 05:11

The date is July 12th, 1976 and it's a Monday. Anyone born today will have the star sign Cancer. It's summer, so the temperatures are warmer and the evenings are longer than usual.

In America, the song Afternoon Delight by Starland Vocal Band is on top of the singles charts. Over in the UK, Forever And Ever / My Friend The Wind (The Roussos Phenomenon EP) by Demis Roussos is the number one hit song. Gerald Ford is currently the President of the United States and the movie The Omen is at the top of the Box Office.

If you were to travel back to this day, notable figures such as Anissa Jones, Tommy Bolin, Elvis Presley and Marc Bolan would all be still alive. On TV, people are watching popular shows such as "Columbo", "The Bob Newhart Show", "M*A*S*H" and "Barnaby Jones". Meanwhile, gamers are playing titles such as "Tank", "Pursuit", "Gun Fight" and "Breakout".

Kids and teenagers are watching TV shows such as "Happy Days", "Land of the Lost", "Return to the Planet of the Apes" and "The Oddball Couple". If you're a kid or a teenager, then you're probably playing with toys such as Big Jim (action figure), Magna Doodle, Connect Four and Stretch Armstrong.

If you are looking for some childhood nostalgia, then check out July 12th, 1982 instead.

Wrestler.
Born on July 12th, 1977
He was born exactly one year after this date.

Gerald Ford was the President of the United States on July 12th, 1976.

James Callaghan was the Prime Minister of the United Kingdom on July 12th, 1976.