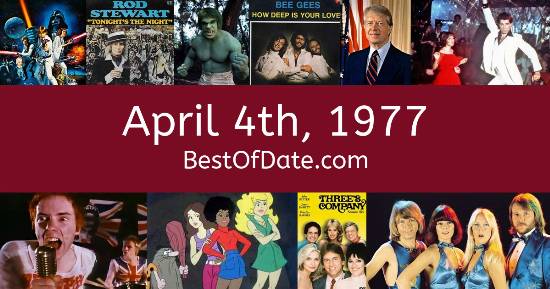 Songs that were on top of the music singles charts in the USA and the United Kingdom on April 4th, 1977.

The date is April 4th, 1977 and it's a Monday. Anyone born today will have the star sign Aries. The summer of 1977 is drawing closer and temperatures have started to rise.

In America, the song Rich Girl by Hall & Oates is on top of the singles charts. Over in the UK, Knowing Me Knowing You by ABBA is the number one hit song. Jimmy Carter is currently the President of the United States and the movie Airport '77 is at the top of the Box Office.

If you were to travel back to this day, notable figures such as Elvis Presley, Marc Bolan, Charlie Chaplin and Keith Moon would all be still alive. On TV, people are watching popular shows such as "Maude", "Starsky & Hutch", "The Bionic Woman" and "Laverne & Shirley". Meanwhile, gamers are playing titles such as "Tank", "Pursuit", "Gun Fight" and "Breakout".

Kids and teenagers are watching TV shows such as "The Pink Panther Show", "The Electric Company", "Happy Days" and "Bagpuss". Popular toys at the moment include the likes of VertiBird (toy helicopter), Evel Knievel Stunt Cycle, Magna Doodle and Cher dolls.

If you are looking for some childhood nostalgia, then check out April 4th, 1983 instead.

Actor. Deceased
Born on April 4th, 1979
He was born exactly 2 years after this date.

German soccer player.
Born on April 4th, 1987
He was born exactly 10 years after this date.

Jimmy Carter was the President of the United States on April 4th, 1977.

James Callaghan was the Prime Minister of the United Kingdom on April 4th, 1977.

Enter your date of birth below to find out how old you were on April 4th, 1977.

Here are some fun statistics about April 4th, 1977.