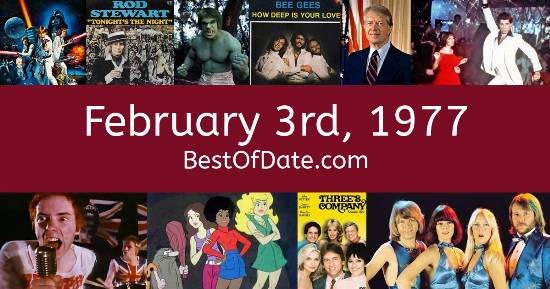 Songs that were on top of the music singles charts in the USA and the United Kingdom on February 3rd, 1977.

The date is February 3rd, 1977 and it's a Thursday. Anyone born today will have the star sign Aquarius. In America, the song Car Wash by Rose Royce is on top of the singles charts.

Over in the UK, Don't Give Up On Us by David Soul is the number one hit song. Jimmy Carter is currently the President of the United States and the movie Rocky is at the top of the Box Office. In the United Kingdom, James Callaghan is the current Prime Minister.

On TV, people are watching popular shows such as "Emergency!", "Kojak", "The Rockford Files" and "Fawlty Towers". Meanwhile, gamers are playing titles such as "Tank", "Pursuit", "Gun Fight" and "Breakout". Children and teenagers are currently watching television shows such as "Captain Kangaroo", "Mister Rogers' Neighborhood", "All in the Family" and "The Muppet Show".

Popular toys at the moment include the likes of Lite-Brite, VertiBird (toy helicopter), Risk board game and Mattel Electronic Football (handheld game).

If you are looking for some childhood nostalgia, then check out February 3rd, 1983 instead.

Singer.
Born on February 3rd, 1990
He was born exactly 13 years after this date.

Jimmy Carter was the President of the United States on February 3rd, 1977.

James Callaghan was the Prime Minister of the United Kingdom on February 3rd, 1977.

Enter your date of birth below to find out how old you were on February 3rd, 1977.

Here are some fun statistics about February 3rd, 1977.

Have something to say about February 3rd, 1977?