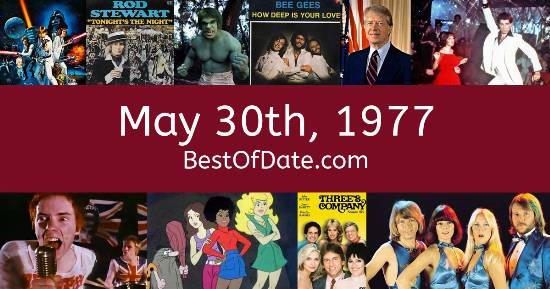 On May 30th, 1977, the following songs were at the top of the music charts in the USA and the UK.

The top "Box Office" movie on this date was the film "The Greatest".

The date is May 30th, 1977, and it's a Monday. Anyone born today will have the star sign Gemini. The summer of 1977 has finally arrived. The weather has warmed up and the evenings are brighter than usual.

In America, the song Sir Duke by Stevie Wonder is on top of the singles charts. Over in the UK, I Don't Want To Talk About It / The First Cut Is The Deepest by Rod Stewart is the number one hit song. Jimmy Carter is currently the President of the United States, and the movie The Greatest is at the top of the Box Office.

A new song called "God Save the Queen" has recently been released by English punk band The Sex Pistols. If you were to travel back to this day, notable figures such as Elvis Presley, Marc Bolan, Charlie Chaplin and Keith Moon would all be still alive. On TV, people are watching popular shows such as "The Bob Newhart Show", "The Six Million Dollar Man", "Happy Days" and "Starsky & Hutch".

Meanwhile, gamers are playing titles such as "Tank", "Pursuit", "Gun Fight" and "Breakout". Kids and teenagers are watching TV shows such as "All in the Family", "Fat Albert and the Cosby Kids", "Star Trek: The Animated Series" and "The Muppet Show". If you're a kid or a teenager, then you're probably playing with toys such as Troll doll, the Easy-Bake Oven, Battleship (game) and Cher dolls.

These are trending news stories and fads that were prevalent at this time. These are topics that would have been in the media on May 30th, 1977.

Check out our personality summary for people who were born on May 30th, 1977.

Television shows that people were watching in May, 1977.

Popular video games that people were playing in May of 1977.

If you are looking for some childhood nostalgia, then you should check out May 30th, 1983, instead.

Celebrities, historical figures, and other notable people who were born on May 30th.

NBA player. Deceased
Born on May 30th, 1982
He was born exactly 5 years after this date.

National holidays and famous events that fall on the 30th of May.

Jimmy Carter was the President of the United States on May 30th, 1977.

Enter your date of birth below to find out how old you were on May 30th, 1977.
This information is not transmitted to our server.