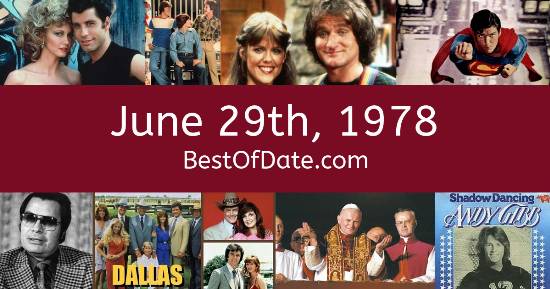 Songs that were on top of the music singles charts in the USA and the United Kingdom on June 29th, 1978.

The date is June 29th, 1978 and it's a Thursday. Anyone born today will have the star sign Cancer. It's summer, so the temperatures are warmer and the evenings are longer than usual.

In America, the song Shadow Dancing by Andy Gibb is on top of the singles charts. Over in the UK, You're The One That I Want by John Travolta & Olivia Newton-John is the number one hit song. Jimmy Carter is currently the President of the United States and the movie Grease is at the top of the Box Office.

A musical romantic comedy film called "Grease" is being played in movie theaters at the moment. If you were to travel back to this day, notable figures such as Keith Moon, Sid Vicious and John Wayne would all be still alive. On TV, people are watching popular shows such as "M*A*S*H", "Little House on the Prairie", "The Jeffersons" and "Chips".

Meanwhile, gamers are playing titles such as "Pursuit", "Gun Fight" and "Breakout". Children and teenagers are currently watching television shows such as "Scooby-Doo, Where Are You!", "Sesame Street", "Schoolhouse Rock!" and "Happy Days". If you're a kid or a teenager, then you're probably playing with toys such as Troll doll, the Easy-Bake Oven, Mattel Electronic Football (handheld game) and Shogun Warriors.

If you are looking for some childhood nostalgia, then check out June 29th, 1984 instead.

Jimmy Carter was the President of the United States on June 29th, 1978.

James Callaghan was the Prime Minister of the United Kingdom on June 29th, 1978.