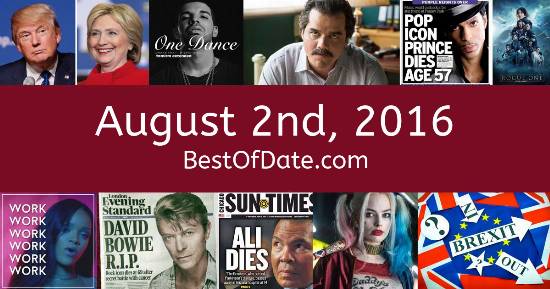 Songs that were on top of the music singles charts in the USA and the United Kingdom on August 2nd, 2016.

The date is August 2nd, 2016 and it's a Tuesday. Anyone born today will have the star sign Leo. It's summer, so the temperatures are warmer and the evenings are longer than usual.

It's 2016, so the music charts are being dominated by artists such as Drake, Lukas Graham, Sia, Mike Posner, The Chainsmokers and Calvin Harris. A meme called "Arthur's Fist" is currently going viral on the Internet. The reaction image, which is used to highlight infuriating situations, features Arthur from the TV series holding a clinched fist. The 2016 United States presidential election is in full swing, with Hillary Clinton facing off against Donald Trump.

The popular app Instagram has released a new feature called "Stories". If you were to travel back to this day, notable figures such as Fidel Castro, Big Syke, George Michael and Carrie Fisher would all be still alive. On TV, people are watching popular shows such as "The Vampire Diaries", "The Walking Dead", "Peaky Blinders" and "Making a Murderer".

Barack Obama was the President of the United States on August 2nd, 2016.

Theresa May was the Prime Minister of the United Kingdom on August 2nd, 2016.

Enter your date of birth below to find out how old you were on August 2nd, 2016.

Here are some fun statistics about August 2nd, 2016.