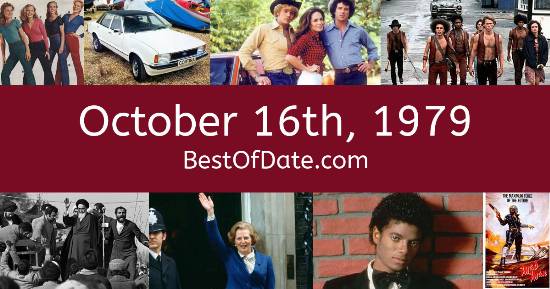 Songs that were on top of the music singles charts in the USA and the United Kingdom on October 16th, 1979.

The date is October 16th, 1979 and it's a Tuesday. Anyone born today will have the star sign Libra. The summer is long gone. Temperatures have started to become much cooler and the evenings are beginning to get darker.

Fallen leaves have carpeted driveways, lawns, pathways and sidewalks and there's a fresh earthy scent in the ear. In America, the song Rise by Herb Alpert is on top of the singles charts. Over in the UK, Video Killed The Radio Star by Buggles is the number one hit song.

On TV, people are watching popular shows such as "M*A*S*H", "Last of the Summer Wine", "Barnaby Jones" and "The Muppet Show". Meanwhile, gamers are playing titles such as "Gun Fight", "Breakout", "Space Invaders" and "Lunar Lander". Children and teenagers are currently watching television shows such as "The Bugs Bunny Show", "The Pink Panther Show", "Sesame Street" and "Battle of the Planets".

If you're a kid or a teenager, then you're probably playing with toys such as Big Jim (action figure), Dungeons & Dragons, Stretch Armstrong and Star Wars action figures.

Jimmy Carter was the President of the United States on October 16th, 1979.

Margaret Thatcher was the Prime Minister of the United Kingdom on October 16th, 1979.

Enter your date of birth below to find out how old you were on October 16th, 1979.

Here are some fun statistics about October 16th, 1979.

Leave a comment and tell everyone why October 16th, 1979 is important to you.