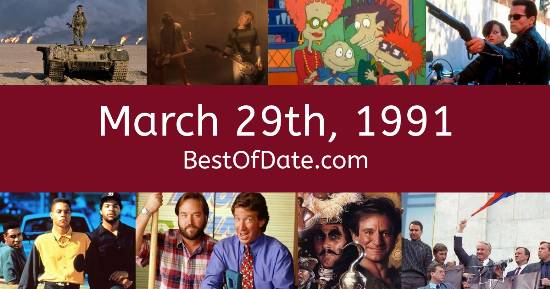 Songs that were on top of the music singles charts in the USA and the United Kingdom on March 29th, 1991:

The date is March 29th, 1991 and it's a Friday. Anyone born today will have the star sign Aries. Currently, people have "that Friday feeling" and are looking forward to the weekend.

Spring has arrived and the days have become longer. In America, the song Coming Out Of The Dark by Gloria Estefan is on top of the singles charts. Over in the UK, The One And Only by Chesney Hawkes is the number one hit song.

George W. Bush Snr. is currently the President of the United States and the movie Silence of the Lambs is at the top of the Box Office. In the United Kingdom, John Major is the current Prime Minister. In fashion, many of the trends from the late 80s are still popular. Colored tights, denim overalls, leotards, flannel shirts and shoulder pads are all fashionable at the moment.

In Europe, the Soviet Union is continuing to dissolve. A new teen sitcom called "Clarissa Explains It All" has just been released on Nickelodeon. In wrestling, Hulk Hogan has just defeated Sgt. Slaughter at WrestleMania VII.

New Kids on the Block singer Donnie Wahlberg has recently been arrested on suspicion of setting fire to his hotel room in Kentucky. There is shock and outrage following the recent murders of three civilians by the UVF in Northern Ireland. On TV, people are watching popular shows such as "The Wonder Years", "Seinfeld", "Family Matters" and "The Fresh Prince of Bel-Air".

Who was the Prime Minister of the United Kingdom on March 29th, 1991?

Enter your date of birth below to find out how old you were on March 29th, 1991.

Looking for some nostalgia? Here are some Youtube videos relating to March 29th, 1991. Please note that videos are automatically selected by Youtube and that results may vary! Click on the "Load Next Video" button to view the next video in the search playlist. In many cases, you'll find episodes of old TV shows, documentaries, music videos and soap dramas.