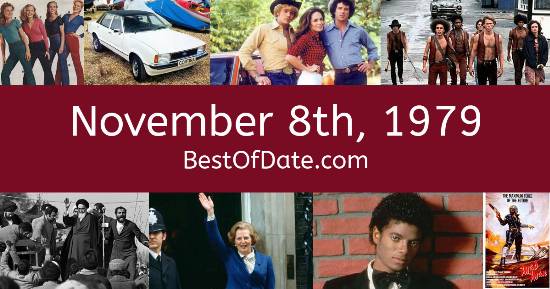 Songs that were on top of the music singles charts in the USA and the United Kingdom on November 8th, 1979.

The date is November 8th, 1979 and it's a Thursday. Anyone born today will have the star sign Scorpio. It's November, so the evenings are getting darker and the days are getting colder.

If you were to travel back to this day, notable figures such as Alfred Hitchcock, Ian Curtis, Steve McQueen and John Lennon would all be still alive. On TV, people are watching popular shows such as "Hawaii Five-O", "Last of the Summer Wine", "Chips" and "Taxi". Meanwhile, gamers are playing titles such as "Gun Fight", "Breakout", "Lunar Lander" and "Asteroids".

Children and teenagers are currently watching television shows such as "Captain Kangaroo", "Sesame Street", "Captain Caveman and the Teen Angels" and "The All New Popeye Hour". If you're a kid or a teenager, then you're probably playing with toys such as Operation, Twister mat, VertiBird (toy helicopter) and Lego Technic.

If you are looking for some childhood nostalgia, then check out November 8th, 1985 instead.

Programmer and Internet hacktivist. Deceased
Born on November 8th, 1986
He was born exactly 7 years after this date.

Jimmy Carter was the President of the United States on November 8th, 1979.

Margaret Thatcher was the Prime Minister of the United Kingdom on November 8th, 1979.

Have something to say about November 8th, 1979?

Enter your date of birth below to find out how old you were on November 8th, 1979.

Here are some fun statistics about November 8th, 1979.