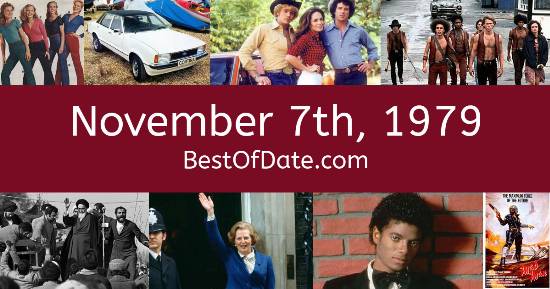 Songs that were on top of the music singles charts in the USA and the United Kingdom on November 7th, 1979.

The date is November 7th, 1979 and it's a Wednesday. Anyone born today will have the star sign Scorpio. It's November, so the evenings are getting darker and the days are getting colder.

On TV, people are watching popular shows such as "The Waltons", "The Muppet Show", "Mork & Mindy" and "Hart to Hart". Meanwhile, gamers are playing titles such as "Gun Fight", "Breakout", "Space Invaders" and "Asteroids". Children and teenagers are currently watching television shows such as "Mister Rogers' Neighborhood", "Fat Albert and the Cosby Kids", "Happy Days" and "The Muppet Show".

Popular toys at the moment include the likes of Etch A Sketch, Lite-Brite, Big Jim (action figure) and Water Ring Toss.

If you are looking for some childhood nostalgia, then check out November 7th, 1985 instead.

Actor.
Born on November 7th, 1983
He was born exactly 4 years after this date.

Rapper.
Born on November 7th, 1988
He was born exactly 9 years after this date.

Soccer player.
Born on November 7th, 1990
He was born exactly 11 years after this date.

Singer.
Born on November 7th, 1996
She was born exactly 17 years after this date.

Soccer player.
Born on November 7th, 2000
He was born exactly 21 years after this date.

Jimmy Carter was the President of the United States on November 7th, 1979.

Margaret Thatcher was the Prime Minister of the United Kingdom on November 7th, 1979.

Enter your date of birth below to find out how old you were on November 7th, 1979.

Here are some fun statistics about November 7th, 1979.

Have something to say about November 7th, 1979?