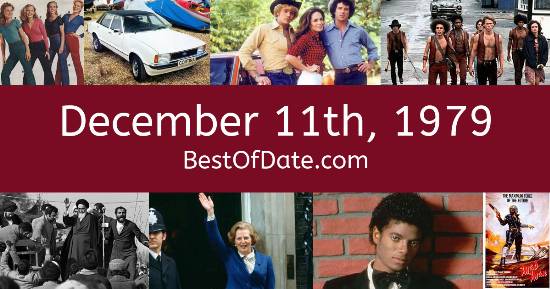 These songs were on top of the music charts in the United States and the United Kingdom on December 11th, 1979.

The movie "10" was at the top of the Box Office on this day.

The date is December 11th, 1979, and it's a Tuesday. Anyone born today will have the star sign Sagittarius. The Christmas season of 1979 is in full swing. People are putting up their decorations and festive songs are playing on the radio.

In America, the song Babe by Styx is on top of the singles charts. Over in the UK, Another Brick In The Wall by Pink Floyd is the number one hit song. Jimmy Carter is currently the President of the United States, and the movie 10 is at the top of the Box Office.

"Star Trek: The Motion Picture" has just been released. If you were to travel back to this day, notable figures such as Alfred Hitchcock, Ian Curtis, Steve McQueen and John Lennon would all be still alive. On TV, people are watching popular shows such as "The Rockford Files", "Soap", "Chips" and "The Love Boat".

Meanwhile, gamers are playing titles such as "Gun Fight", "Breakout", "Lunar Lander" and "Asteroids". Kids and teenagers are watching TV shows such as "Captain Kangaroo", "The Muppet Show", "Battle of the Planets" and "Rickety Rocket". If you're a kid or a teenager, then you're probably playing with toys such as Etch A Sketch, Connect Four, Mattel Electronic Football (handheld game) and Snoopy Sno-Cone Machine.

These are trending news stories and fads that were prevalent at this time. These are topics that would have been in the media on December 11th, 1979.

News stories and other events that happened around December 11th, 1979.

Check out our personality summary for people who were born on December 11th, 1979.

Television shows that people were watching in December, 1979.

Popular video games that people were playing in December of 1979.

If you are looking for some childhood nostalgia, then you should check out December 11th, 1985 instead.

Jimmy Carter was the President of the United States on December 11th, 1979.

Margaret Thatcher was the Prime Minister of the United Kingdom on December 11th, 1979.

Find out what your age was on December 11th, 1979, by entering your DOB below.
This information is not saved on our server.

Here are some fun statistics about December 11th, 1979.