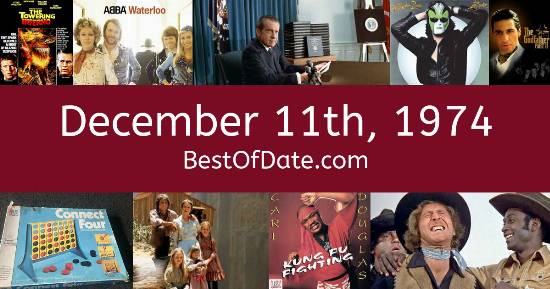 These songs were on top of the music charts in the United States and the United Kingdom on December 11th, 1974.

The movie "Death Wish" was at the top of the Box Office on this day.

The date is December 11th, 1974, and it's a Wednesday. Anyone born today will have the star sign Sagittarius. The Christmas season of 1974 is in full swing. People are putting up their decorations and festive songs are playing on the radio.

In America, the song Kung Fu Fighting by Carl Douglas is on top of the singles charts. Over in the UK, You're The First, The Last, My Everything by Barry White is the number one hit song. Gerald Ford is currently the President of the United States, and the movie Death Wish is at the top of the Box Office.

If you were to travel back to this day, notable figures such as Eamon de Valera would be still alive. On TV, people are watching popular shows such as "What's My Line?", "The Main Chance", "Maude" and "The Waltons". Meanwhile, gamers are playing titles such as "Pong", "Space Race", "Gotcha" and "Tank".

Children and teenagers are currently watching television shows such as "JOT the Dot", "Fat Albert and the Cosby Kids", "The Adventures of Black Beauty" and "Inch High, Private Eye". Popular toys at the moment include the likes of Etch A Sketch, Weebles, Magna Doodle and Dungeons & Dragons.

These are trending news stories and fads that were prevalent at this time. These are topics that would have been in the media on December 11th, 1974.

News stories and other events that happened around December 11th, 1974.

Check out our personality summary for people who were born on December 11th, 1974.

Television shows that people were watching in December, 1974.

Popular video games that people were playing in December of 1974.

If you are looking for some childhood nostalgia, then you should check out December 11th, 1980 instead.

Gerald Ford was the President of the United States on December 11th, 1974.

Harold Wilson was the Prime Minister of the United Kingdom on December 11th, 1974.

Find out what your age was on December 11th, 1974, by entering your DOB below.
This information is not saved on our server.

Here are some fun statistics about December 11th, 1974.