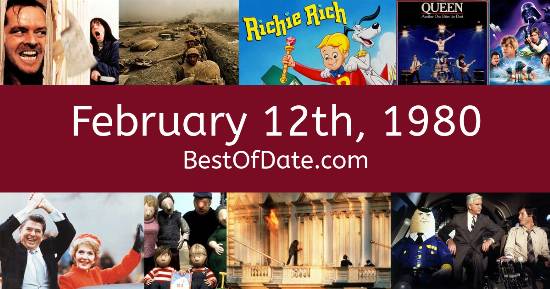 These songs were on top of the music charts in the United States and the United Kingdom on February 12th, 1980.

The movie "The Silent Scream" was at the top of the Box Office on this day.

The date is February 12th, 1980, and it's a Tuesday. Anyone born today will have the star sign Aquarius. Valentine's Day is just around the corner.

In America, the song Do That To Me One More Time by Captain & Tenille is on top of the singles charts. Over in the UK, Coward Of The County by Kenny Rogers is the number one hit song. Jimmy Carter is currently the President of the United States, and the movie The Silent Scream is at the top of the Box Office.

If you were to travel back to this day, notable figures such as Alfred Hitchcock, Ian Curtis, Dorothy Stratten and Steve McQueen would all be still alive. On TV, people are watching popular shows such as "The Two Ronnies", "Barnaby Jones", "Little House on the Prairie" and "The Jeffersons". Meanwhile, gamers are playing titles such as "Breakout", "Space Invaders", "Lunar Lander" and "Asteroids".

Kids and teenagers are watching TV shows such as "Mork & Mindy", "Diff'rent Strokes", "Casper and the Angels" and "The New Adventures of Flash Gordon". Popular toys at the moment include the likes of Micronauts, Hungry Hungry Hippos, Big wheel (tricycle) and Strawberry Shortcake dolls.

These are trending news stories and fads that were prevalent at this time. These are topics that would have been in the media on February 12th, 1980.

Check out our personality summary for people who were born on February 12th, 1980.

Television shows that people were watching in February, 1980.

Popular video games that people were playing in February of 1980.

If you are looking for some childhood nostalgia, then you should check out February 12th, 1986, instead.

Celebrities, historical figures, and other notable people who were born on February 12th.

Singer.
Born on February 12th, 1988
He was born exactly 8 years after this date.

Jimmy Carter was the President of the United States on February 12th, 1980.

Enter your date of birth below to find out how old you were on February 12th, 1980.
This information is not transmitted to our server.

Here are some fun statistics about February 12th, 1980.