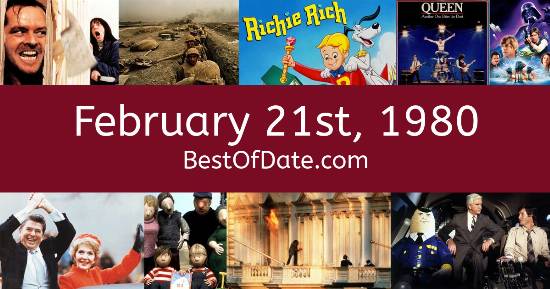 Songs that were on top of the music singles charts in the USA and the United Kingdom on February 21st, 1980.

The date is February 21st, 1980 and it's a Thursday. Anyone born today will have the star sign Pisces. In America, the song Crazy Little Thing Called Love by Queen is on top of the singles charts.

Over in the UK, Coward Of The County by Kenny Rogers is the number one hit song. Jimmy Carter is currently the President of the United States and the movie Cruising is at the top of the Box Office. In the United Kingdom, Margaret Thatcher is the current Prime Minister.

On TV, people are watching popular shows such as "The Love Boat", "WKRP in Cincinnati", "The Dukes of Hazzard" and "Hart to Hart". Meanwhile, gamers are playing titles such as "Breakout", "Space Invaders", "Lunar Lander" and "Asteroids". Kids and teenagers are watching TV shows such as "Mister Rogers' Neighborhood", "Happy Days", "Rickety Rocket" and "The New Adventures of Flash Gordon".

If you're a kid or a teenager, then you're probably playing with toys such as Micronauts, Water Ring Toss, Snoopy Sno-Cone Machine and Big wheel (tricycle).

If you are looking for some childhood nostalgia, then check out February 21st, 1986 instead.

Actress.
Born on February 21st, 1987
She was born exactly 7 years after this date.

Soccer player.
Born on February 21st, 1991
He was born exactly 11 years after this date.

Jimmy Carter was the President of the United States on February 21st, 1980.

Margaret Thatcher was the Prime Minister of the United Kingdom on February 21st, 1980.

Enter your date of birth below to find out how old you were on February 21st, 1980.

Here are some fun statistics about February 21st, 1980.