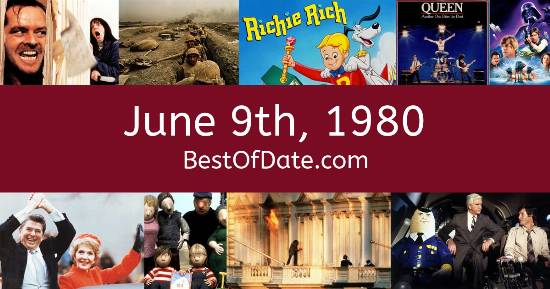 Songs that were on top of the music singles charts in the USA and the United Kingdom on June 9th, 1980.

The movie "The Empire Strikes Back" was at the top of the box office on June 9th, 1980.

The date is June 9th, 1980 and it's a Monday. Anyone born today will have the star sign Gemini. It's summer, so the temperatures are warmer and the evenings are longer than usual.

In America, the song Funky Town by Lipps Inc. is on top of the singles charts. Over in the UK, Suicide Is Painless by MASH is the number one hit song. Jimmy Carter is currently the President of the United States and the movie The Empire Strikes Back is at the top of the Box Office.

If you were to travel back to this day, notable figures such as Steve McQueen, John Lennon, Bob Marley and Bill Shankly would all be still alive. On TV, people are watching popular shows such as "Little House on the Prairie", "The Jeffersons", "The Love Boat" and "Mork & Mindy". Meanwhile, gamers are playing titles such as "Breakout", "Lunar Lander", "Asteroids" and "Galaxian".

Children and teenagers are currently watching television shows such as "Captain Kangaroo", "Happy Days", "Battle of the Planets" and "Diff'rent Strokes". If you're a kid or a teenager, then you're probably playing with toys such as the Easy-Bake Oven, Lite-Brite, Hungry Hungry Hippos and Rubik's Cube.

If you are looking for some childhood nostalgia, then check out June 9th, 1986 instead.

Actress.
Born on June 9th, 1981
She was born exactly one year after this date.

Jimmy Carter was the President of the United States on June 9th, 1980.

Margaret Thatcher was the Prime Minister of the United Kingdom on June 9th, 1980.

Enter your date of birth below to find out how old you were on June 9th, 1980.

Here are some fun statistics about June 9th, 1980.