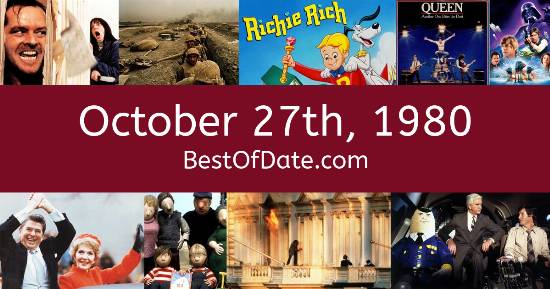 Songs that were on top of the music singles charts in the USA and the United Kingdom on October 27th, 1980.

The date is October 27th, 1980 and it's a Monday. Anyone born today will have the star sign Scorpio. The summer is long gone. Temperatures have started to become much cooler and the evenings are beginning to get darker.

Fallen leaves have carpeted driveways, lawns, pathways and sidewalks and there's a fresh earthy scent in the ear. Halloween of 1980 is just days away. People are watching horror movies and thinking about which costume they are going to wear. Others are organizing parties. The song Woman In Love by Barbra Streisand is on top of the singles charts in both the USA and the United Kingdom.

On TV, people are watching popular shows such as "Laverne & Shirley", "Mork & Mindy", "Hart to Hart" and "Knots Landing". Meanwhile, gamers are playing titles such as "Breakout", "Space Invaders", "Asteroids" and "Galaxian". Kids and teenagers are watching TV shows such as "The Bugs Bunny Show", "Sesame Street", "Happy Days" and "Cockleshell Bay".

If you're a kid or a teenager, then you're probably playing with toys such as Magna Doodle, the Atari 2600, Water Ring Toss and Snoopy Sno-Cone Machine.

If you are looking for some childhood nostalgia, then check out October 27th, 1986 instead.

National holidays and famous events that fall on the 27th of October.

Jimmy Carter was the President of the United States on October 27th, 1980.

Margaret Thatcher was the Prime Minister of the United Kingdom on October 27th, 1980.

Enter your date of birth below to find out how old you were on October 27th, 1980.

Here are some fun statistics about October 27th, 1980.