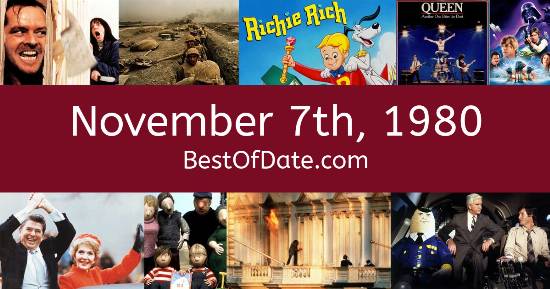 Songs that were on top of the music singles charts in the USA and the United Kingdom on November 7th, 1980.

The movie "Private Benjamin" was at the top of the box office on November 7th, 1980.

The date is November 7th, 1980 and it's a Friday. Anyone born today will have the star sign Scorpio. Currently, people have "that Friday feeling" and are looking forward to the weekend.

It's November, so the evenings are getting darker and the days are getting colder. The song Woman In Love by Barbra Streisand is on top of the singles charts in both the USA and the United Kingdom. Jimmy Carter is currently the President of the United States and the movie Private Benjamin is at the top of the Box Office.

If you were to travel back to this day, notable figures such as Steve McQueen, John Lennon, Bob Marley and Bill Shankly would all be still alive. On TV, people are watching popular shows such as "Happy Days", "Quincy, M.E.", "Three's Company" and "Mork & Mindy". Meanwhile, gamers are playing titles such as "Breakout", "Asteroids", "Galaxian" and "Missile Command".

Children and teenagers are currently watching television shows such as "Mister Rogers' Neighborhood", "The Muppet Show", "Battle of the Planets" and "Diff'rent Strokes". Popular toys at the moment include the likes of Lite-Brite, Star Wars action figures, Speak & Spell and Snoopy Sno-Cone Machine.

If you are looking for some childhood nostalgia, then check out November 7th, 1986 instead.

Actor.
Born on November 7th, 1983
He was born exactly 3 years after this date.

Rapper.
Born on November 7th, 1988
He was born exactly 8 years after this date.

Soccer player.
Born on November 7th, 1990
He was born exactly 10 years after this date.

Singer.
Born on November 7th, 1996
She was born exactly 16 years after this date.

Soccer player.
Born on November 7th, 2000
He was born exactly 20 years after this date.

Jimmy Carter was the President of the United States on November 7th, 1980.

Margaret Thatcher was the Prime Minister of the United Kingdom on November 7th, 1980.

Enter your date of birth below to find out how old you were on November 7th, 1980.

Here are some fun statistics about November 7th, 1980.

Have something to say about November 7th, 1980?