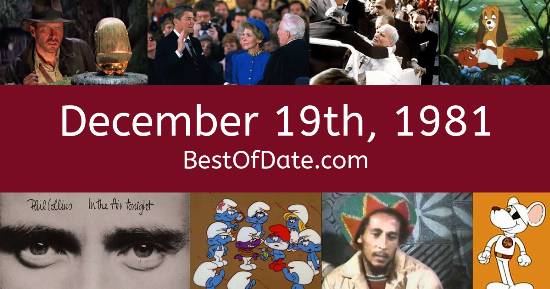 Songs that were on top of the music singles charts in the USA and the United Kingdom on December 19th, 1981.

The date is December 19th, 1981 and it's a Saturday. Anyone born today will have the star sign Sagittarius. Currently, people are enjoying their weekend.

On TV, people are watching popular shows such as "Quincy, M.E.", "The Dukes of Hazzard", "Spider-Man and His Amazing Friends" and "The Smurfs". Meanwhile, gamers are playing titles such as "Space Invaders", "Lunar Lander", "Asteroids" and "Pac-Man". Kids and teenagers are watching TV shows such as "Mister Rogers' Neighborhood", "Diff'rent Strokes", "Thundarr the Barbarian" and "The Smurfs".

Popular toys at the moment include the likes of the Easy-Bake Oven, Cabbage Patch Kids, Big wheel (tricycle) and Monchhichi / Chicaboo.

Ronald Reagan was the President of the United States on December 19th, 1981.

Margaret Thatcher was the Prime Minister of the United Kingdom on December 19th, 1981.

Enter your date of birth below to find out how old you were on December 19th, 1981.

Here are some fun statistics about December 19th, 1981.

Leave a comment and tell everyone why December 19th, 1981 is important to you.