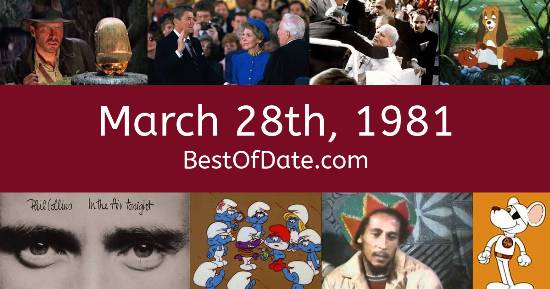 Songs that were on top of the music singles charts in the USA and the United Kingdom on March 28th, 1981.

The date is March 28th, 1981 and it's a Saturday. Anyone born today will have the star sign Aries. Currently, people are enjoying their weekend.

Spring has arrived and the days have become longer. In America, the song Rapture by Blondie is on top of the singles charts. Over in the UK, This Ole House by Shakin' Stevens is the number one hit song.

On TV, people are watching popular shows such as "The Waltons", "Happy Days", "Eight Is Enough" and "The Love Boat". Meanwhile, gamers are playing titles such as "Breakout", "Lunar Lander", "Galaxian" and "Missile Command". Children and teenagers are currently watching television shows such as "The Bugs Bunny Show", "Sesame Street", "Cockleshell Bay" and "Thundarr the Barbarian".

Popular toys at the moment include the likes of the Easy-Bake Oven, Dungeons & Dragons, Water Ring Toss and Monchhichi / Chicaboo.

Ronald Reagan was the President of the United States on March 28th, 1981.

Margaret Thatcher was the Prime Minister of the United Kingdom on March 28th, 1981.

Enter your date of birth below to find out how old you were on March 28th, 1981.