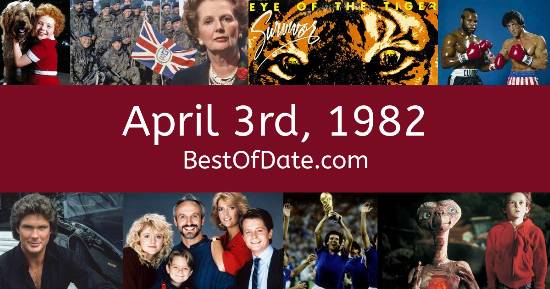 Songs that were on top of the music singles charts in the USA and the United Kingdom on April 3rd, 1982.

The date is April 3rd, 1982 and it's a Saturday. Anyone born today will have the star sign Aries. Currently, people are enjoying their weekend.

Because it's 1982, the radio stations are being dominated by artists such as Survivor, Men at Work, Joan Jett & The Blackhearts, Dexys Midnight Runners, Paul McCartney and Stevie Wonder. On TV, people are watching popular shows such as "Three's Company", "The Dukes of Hazzard", "Trapper John, M.D." and "The Smurfs". Meanwhile, gamers are playing titles such as "Space Invaders", "Asteroids", "Galaxian" and "Pac-Man".

Children and teenagers are currently watching television shows such as "The Bugs Bunny Show", "Fat Albert and the Cosby Kids", "Diff'rent Strokes" and "Danger Mouse". If you're a kid or a teenager, then you're probably playing with toys such as Magna Doodle, Lego Technic, the Atari 2600 and Hungry Hungry Hippos.

A Spotify playlist of songs from the year 1982. Take a trip back to the days of TOTO, the Pointer Sisters, Paul McCartney, Duran Duran and Survivor.

Celebrities, historical figures and notable people who were born on the 3rd of April.

Ronald Reagan was the President of the United States on April 3rd, 1982.

Margaret Thatcher was the Prime Minister of the United Kingdom on April 3rd, 1982.

Enter your date of birth below to find out how old you were on April 3rd, 1982.

Here are some fun statistics about April 3rd, 1982.

Leave a comment and tell everyone why April 3rd, 1982 is important to you.