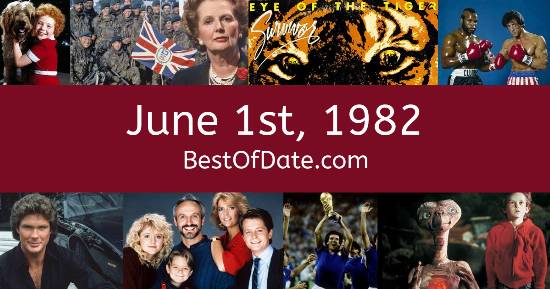 June 1st, 1982 relates to a fictional event in a movie, book, game or television series.

Songs that were on top of the music singles charts in the USA and the United Kingdom on June 1st, 1982.

The date is June 1st, 1982 and it's a Tuesday. Anyone born today will have the star sign Gemini. It's summer, so the temperatures are warmer and the evenings are longer than usual.

In America, the song Ebony And Ivory by Paul McCartney & Stevie Wonder is on top of the singles charts. Over in the UK, House Of Fun by Madness is the number one hit song. Ronald Reagan is currently the President of the United States and the movie Rocky III is at the top of the Box Office.

On TV, people are watching popular shows such as "Columbo.", "The Jeffersons", "The Dukes of Hazzard" and "Cagney & Lacey". Meanwhile, gamers are playing titles such as "Space Invaders", "Asteroids", "Galaxian" and "Pac-Man". Children and teenagers are currently watching television shows such as "Fat Albert and the Cosby Kids", "Happy Days", "Cockleshell Bay" and "The Smurfs".

Popular toys at the moment include the likes of Lite-Brite, Magna Doodle, Snoopy Sno-Cone Machine and Fisher-Price Little People (Farm).

Ronald Reagan was the President of the United States on June 1st, 1982.

Margaret Thatcher was the Prime Minister of the United Kingdom on June 1st, 1982.

Enter your date of birth below to find out how old you were on June 1st, 1982.

Here are some fun statistics about June 1st, 1982.