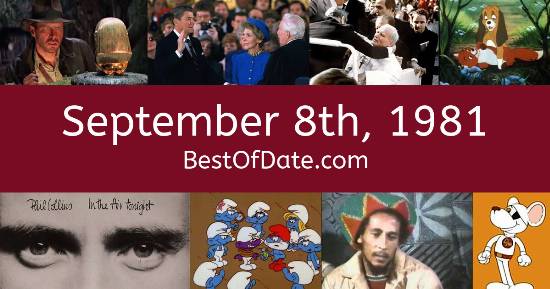 These songs were on top of the music charts in the United States and the United Kingdom on September 8th, 1981.

The movie "Raiders of the Lost Ark" was at the top of the Box Office on September 8th, 1981.

The date is September 8th, 1981, and it's a Tuesday. Anyone born today will have the star sign Virgo. Schools and colleges are starting again and Autumn has officially arrived. As a result, temperatures are beginning to cool and trees are starting to shed their leaves.

In the United States, Labor Day of 1981 has recently come and passed. To many, this means that the summer is officially over. In America, the song Endless Love by Diana Ross & Lionel Richie is on top of the singles charts. Over in the UK, Tainted Love by Soft Cell is the number one hit song.

Because it's 1981, the radio stations are being dominated by artists such as Kim Carnes, Soft Cell, Phil Collins, John Lennon, Stars On 45, Diana Ross and Olivia Newton-John. If you were to travel back to this day, notable figures such as Bill Shankly, William Holden, Natalie Wood and John Belushi would all be still alive. On TV, people are watching popular shows such as "Happy Days", "Taxi", "The Facts of Life" and "The Greatest American Hero".

Meanwhile, gamers are playing titles such as "Space Invaders", "Galaxian", "Missile Command" and "Donkey Kong". Children and teenagers are currently watching television shows such as "Sesame Street", "The All New Popeye Hour", "Mork & Mindy" and "Diff'rent Strokes". If you're a kid or a teenager, then you're probably playing with toys such as Lite-Brite, Simon (memory game), Snoopy Sno-Cone Machine and Intellivision (games console).

These are trending news stories and fads that were prevalent at this time. These are topics that would have been in the media on September 8th, 1981.

Check out our personality summary for people who were born on September 8th, 1981.

If you are looking for some childhood nostalgia, then you should check out September 8th, 1987, instead.

Celebrities, historical figures, and other notable people who were born on September 8th.

Rapper.
Born on September 8th, 1987
He was born exactly 6 years after this date.

DJ. Deceased
Born on September 8th, 1989
He was born exactly 8 years after this date.

Internet personality.
Born on September 8th, 1994
He was born exactly 13 years after this date.

Soccer player.
Born on September 8th, 1994
He was born exactly 13 years after this date.

Actor.
Born on September 8th, 2002
He was born exactly 21 years after this date.

Ronald Reagan was the President of the United States on September 8th, 1981.

Enter your date of birth below to find out how old you were on September 8th, 1981.
This information is not transmitted to our server.

Here are some fun statistics about September 8th, 1981.