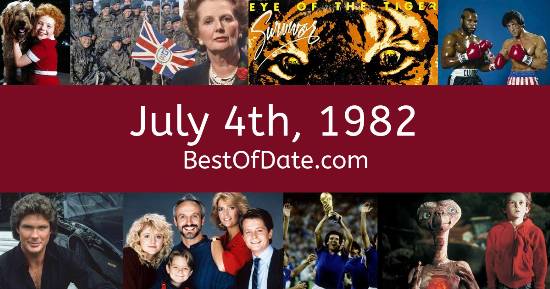 Songs that were on top of the music singles charts in the USA and the United Kingdom on July 4th, 1982.

The date is July 4th, 1982, and it's a Sunday. Anyone born today will have the star sign Cancer. Currently, people are enjoying their weekend.

America is celebrating the 4th of July, which means that fireworks are being set off and families are holding barbeques together. It's summer, so the temperatures are warmer and the evenings are longer than usual. In America, the song Ebony And Ivory by Paul McCartney & Stevie Wonder is on top of the singles charts.

Over in the UK, I've Never Been To Me by Charlotte is the number one hit song. Ronald Reagan is currently the President of the United States, and the movie E.T. is at the top of the Box Office. In the United Kingdom, Margaret Thatcher is the current Prime Minister.

In fashion, women are currently wearing jelly shoes, turtleneck sweaters, loose high-waist pants, crop tops and puffer jackets lined with fur. Meanwhile, men have been ditching the disco look of the 70s in favor of athletic clothing such as tracksuits and sports jerseys. The "preppy" look has also been making a comeback. Because it's 1982, the radio stations are being dominated by artists such as Survivor, Men at Work, Joan Jett & The Blackhearts, Dexys Midnight Runners, Paul McCartney and Stevie Wonder. In Spain, the 1982 FIFA World Cup is currently taking place.

If you were to travel back to this day, notable figures such as Karen Carpenter and Jobriath would be still alive. On TV, people are watching popular shows such as "Little House on the Prairie", "Barney Miller", "Three's Company" and "Archie Bunker's Place". Meanwhile, gamers are playing titles such as "Space Invaders", "Asteroids", "Galaxian" and "Missile Command".

Children and teenagers are currently watching television shows such as "The Bugs Bunny Show", "Happy Days", "The New Adventures of Flash Gordon" and "Cockleshell Bay". Popular toys at the moment include the likes of Lego Technic, Cabbage Patch Kids, Rubik's Cube and Fischer Price cassette player.

These are trending news stories and fads that were prevalent at this time. These are topics that would have been in the media on July 4th, 1982.

Check out our personality summary for people who were born on July 4th, 1982.

Television shows that people were watching in July, 1982.

Popular video games that people were playing in July of 1982.

If you are looking for some childhood nostalgia, then you should check out July 4th, 1988 instead.

Ronald Reagan was the President of the United States on July 4th, 1982.

Margaret Thatcher was the Prime Minister of the United Kingdom on July 4th, 1982.

Enter your date of birth below to find out how old you were on July 4th, 1982.
This information is not transmitted to our server.

Here are some fun statistics about July 4th, 1982.