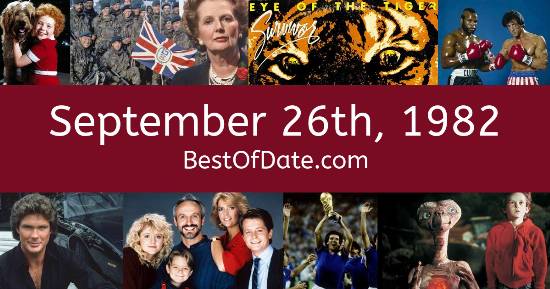 Songs that were on top of the music singles charts in the USA and the United Kingdom on September 26th, 1982.

The movie "Amityville II: The Possession" was at the top of the box office on September 26th, 1982.

The date is September 26th, 1982 and it's a Sunday. Anyone born today will have the star sign Libra. Currently, people are enjoying their weekend.

Schools and colleges are starting again and Autumn has officially arrived. As a result, temperatures are beginning to cool and trees are starting to shed their leaves. The earthy smells of fall have started to fill the air. In America, the song Hard To Say I'm Sorry by Chicago is on top of the singles charts.

Over in the UK, Eye Of The Tiger by Survivor is the number one hit song. Ronald Reagan is currently the President of the United States and the movie Amityville II: The Possession is at the top of the Box Office. In the United Kingdom, Margaret Thatcher is the current Prime Minister.

On TV, people are watching popular shows such as "Little House on the Prairie", "The Jeffersons", "Three's Company" and "The Love Boat". Meanwhile, gamers are playing titles such as "Lunar Lander", "Asteroids", "Galaxian" and "Missile Command". Children and teenagers are currently watching television shows such as "Schoolhouse Rock!", "The Smurfs", "Danger Mouse" and "Dogtanian and the Three Muskehounds".

If you're a kid or a teenager, then you're probably playing with toys such as Big Jim (action figure), Dungeons & Dragons, Strawberry Shortcake dolls and Fischer Price cassette player.

If you are looking for some childhood nostalgia, then check out September 26th, 1988 instead.

Celebrities, historical figures and other notable people who were born on September 26th.

Author. Deceased
Born on September 26th, 1888
He was not alive on this date.

Ronald Reagan was the President of the United States on September 26th, 1982.

Margaret Thatcher was the Prime Minister of the United Kingdom on September 26th, 1982.

Enter your date of birth below to find out how old you were on September 26th, 1982.

Here are some fun statistics about September 26th, 1982.